Projects could be finished by 2018 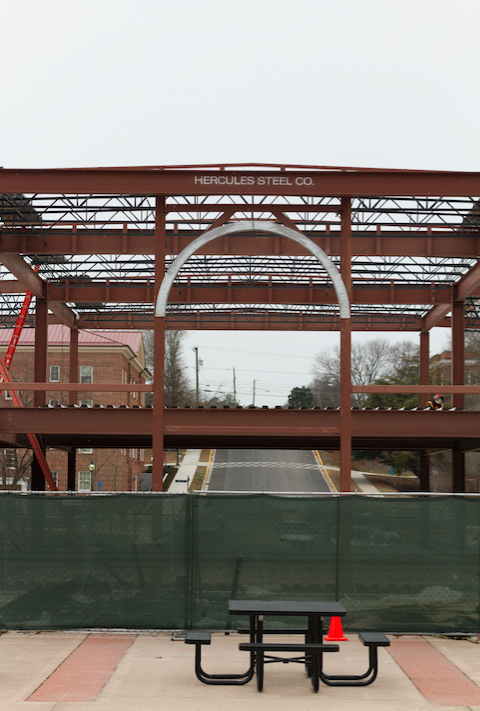 CARSON REEHER | HERALD The new Student Success Center will be situated between the Greenwood Library and Lankford Student Union on Longwood University's campus.

What are the buildings being erected on Longwood’s main campus?

Longwood University’s newest projects are in the midst of construction and will near completion within the next year.

Two buildings — the Student Success Center and Upchurch University Center — are set to be finished by late fall 2017 and late spring 2018, respectively, according to Longwood Director of Communications and Media Relations Matt McWilliams.

McWilliams said both are on schedule. 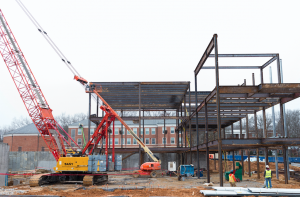 The projects are pieces of the university’s Master Plan, which guides “the development of Longwood’s campus to support approximately 6,000 students by the year 2025, with an extended consideration of the Longwood campus as far as the year 2039.”

“The Student Success Center houses all that support that we offer our students to really thrive here,” McWilliams explained.

According to the Master Plan, the success center will include all student support organizations. “The clustering of these services will create a single destination where students can find academic support, answers and referrals, thus creating a better learning environment and increasing the potential for students’ long-term academic success.”

The building itself will be 25,000 square feet, situated between the Greenwood Library and Lankford Student Union.

Construction of the Student Success Center has been underway for months, with the framework of the building beginning to take shape.

The Upchurch University Center, set at the former Cunningham Residence Hall, has been a work-in-progress for several years, originating from the school’s previous Master Plan.

“Right now, what’s happening is the steel and concrete foundation and framework for the building are being constructed, and over the next couple months, we’ll see that continue to grow and build,” McWilliams said.

With its completion in 2018, the center “will give students even more reasons to congregate, and deeply reinforce the sense of human interaction, interconnectedness and place that is at the heart of the Longwood experience,” according to the plan.

McWilliams corroborated the building’s importance in both propelling the campus forward and fulfilling the needs of students.

The 84,000-square foot center will include multiple food vendors, multipurpose study rooms with the latest technology, meeting rooms for organizations and clubs along with other features.

McWilliams previously said the budget for the building is $30 million with a $4 million leadership gift by Elsie Stossel Upchurch, providing the building’s namesake and anchoring the funding.

In addition to the two major projects on campus, there are repairs taking place on the bell tower of Lancaster Hall. Scaffolding currently surrounds the tower.

Both a new admissions building and a new academic building are in the planning phases, McWilliams said. These projects should begin to take greater shape in the next six-eight months, he said. 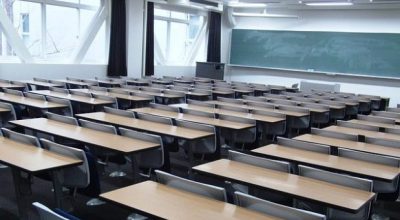