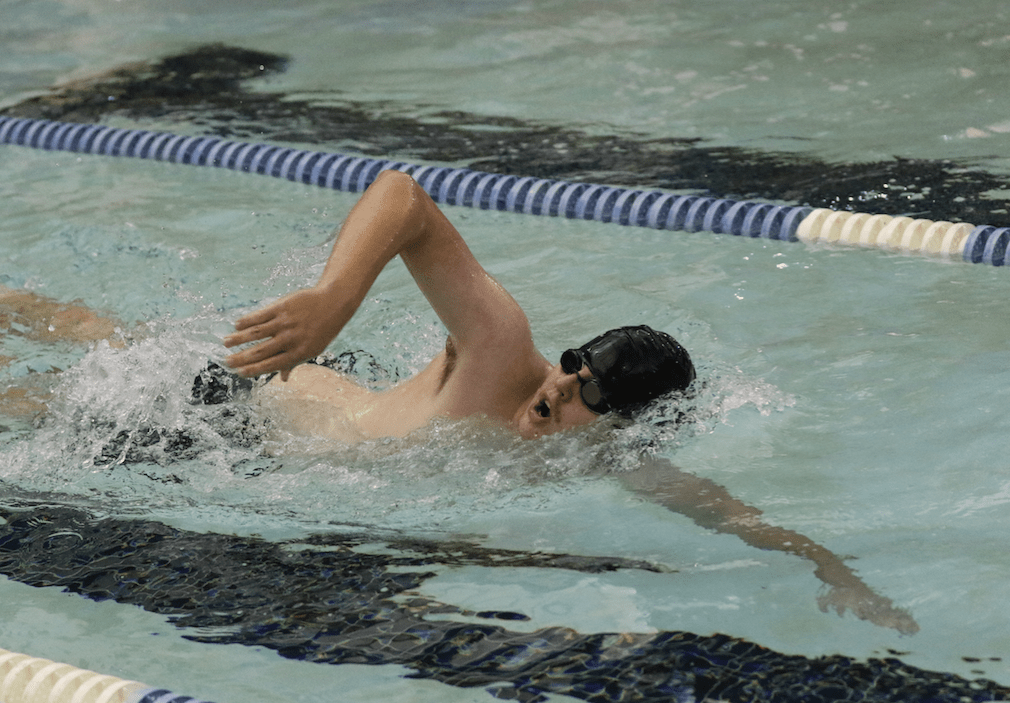 TITUS MOHLER | HERALD Prince Edward County High School senior Henry Lutz is one of the Eagles’ long-distance swimmers, contributing to the team with his performances in the 500-meter freestyle.

The Prince Edward County High School varsity boys and girls swimming teams face their first competition of the new year Tuesday evening with good reason for confidence despite their small size.
“Both of them are showing steady improvement,” Prince Edward Head Swimming Coach Sarah Fulcher said. “They are taking seconds off their time each meet that we race. The problem we have is that there aren’t enough of us competing in order to squish (opponents), if you will. The other teams have double the number of kids that we have, so it’s really hard to compete against that.”
In their most recent meet Dec. 15, the Eagles topped Appomattox County High School 38-37 and fell 40-34 to Shore Swimming. The Lady Eagles lost 54-17 to Appomattox County and 49-24 to Shore Swimming.
Graduation claimed a lot of swimmers that were part of Prince Edward’s program for the 2015-16 season.
“We lost half the kids,” Fulcher said.
In her first year as head coach, she is guiding 17 varsity swimmers, 10 boys and seven girls. There are a few seniors and freshmen, but the majority are juniors and sophomores.
Fulcher is also working with three junior varsity swimmers and is hoping to grow the JV team in the future, establishing it as a foundation that will help the varsity team have the numbers it needs to compete as a team.
“Once we can fill the events, we become a force to be reckoned with,” Fulcher said.
She is keeping her expectations simple and focused for each of her swimmers.
“My expectation is that, individually, every child will get faster from the beginning of the season to the end of the season,” she said.
She hopes to get a boys and girls relay team to states, echoing the success Prince Edward experienced last season when the girls 200-meter freestyle relay, the boys 200 free relay and the boys 200-meter medley relay made it.
Individual standouts this season include junior Connor Stimpert, who is showing promise in the 100-meter butterfly, and freshman Renee Stimpert, who is doing well in the 50-meter freestyle and the 100-meter backstroke.
Senior Craig Burns and junior Aaron Weese return after swimming with the standout relay squads last year.
Senior Henry Lutz and freshman Timara Smith are representing Prince Edward in the long-distance events.
On Tuesday at 7 p.m., Prince Edward will swim at Sweet Briar Colleges against Amherst County High School and other schools.