PE finds success with the press 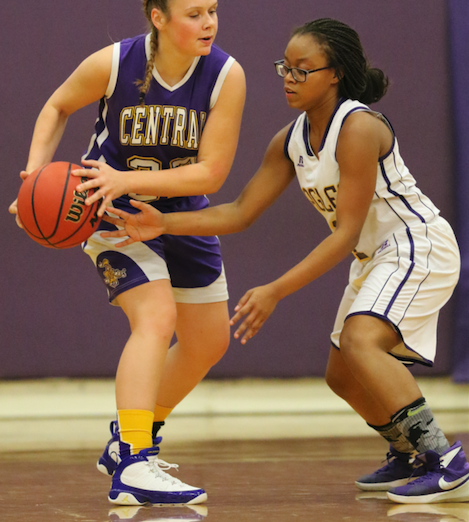 The Prince Edward County High School varsity girls basketball team used Friday night to improve to 2-1 in 2017 and avenge a narrow home loss to Central Lunenburg High School from earlier in the season.

The Lady Eagles recovered from a 58-34 Thursday loss to visiting Nottoway High School by defeating the host Lady Chargers 63-52 Friday, helping ease the pain of losing 50-49 to Central on Dec. 2.

“Last time, we made some mistakes down the stretch that let them come back and beat us, but this time, we didn’t make as many of those mistakes,” Prince Edward Head Coach Carlton Redd said, as his team avoided foul trouble. “It was still a close game. It was an 11-point margin, but it was a lot closer than that.”

“That’s something I’ve been asking her to go ahead and do — ‘Go ahead and take charge in the fourth quarter, and get us where we’ve got to go,’” said Redd, who described Harris’ Friday performance as dazzling.

She finished the night with 30 points.

“She is one of the best players in the district,” Redd said.

“This is her fourth year with me, so she knows the press,” Redd said of Wright. “She’s a beast when it comes to the defense, and when she plays well, we win.”

The coach said that due to Prince Edward’s lack of size, it has to run as much as possible.

“We’ve got to pressure as much as we can to make it as chaotic as possible,” he said.

Wright and Harris are key to this effort, but so, too, is the bench.

“My bench, even though they may not be scoring points, they are coming in and giving us valuable minutes,” Redd said.

Despite the loss to talented Nottoway on Thursday, a game in which Harris scored 19, Redd was pleased with his team’s performance.

“We know who we are, and we know who Nottoway is, and we didn’t back down from who we were,” he said. “They’re a very, very, very good team. My girls, they played their game. We didn’t get in foul trouble. The little things we did a lot better.”