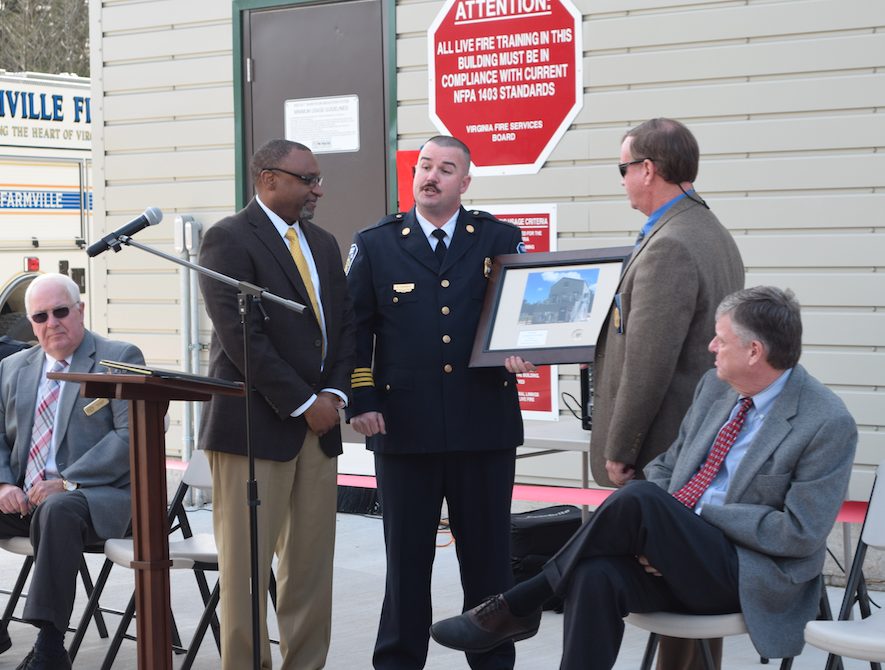 The center houses a state-of-the-art “burn building” to help train firefighters in a safe learning environment.

The $770,000 facility was established to enhance training for Firefighter I and II training programs in Farmville, Prince Edward and Cumberland along with Farmville’s three neighboring jurisdictions, according to Farmville Town Manager Gerald Spates. In all, the training center will serve 17 fire companies with more than 410 volunteers.

In 2014, Assistant Chief Dean Farmer started the process to get grants for the training center. The Town of Farmville received a grant of $480,000 towards the center; the remainder of the funds were raised contributed by town council.

Construction on the facility wrapped up about six months ago.

Burn buildings are the latest technology in fire training, according to fire experts. Coming in a variety of sizes and designs, the buildings are made to represent as many circumstances firefighters may encounter as possible. They provide realistic training for a wide range of situations, such as fire suppression, aerial operation, search and rescue, forceful entry, high-angle rescue and ground ladder operations.

Farmer said the building will be a large step up from other training methods.

“One of the most beneficial things about this training facility is it provides the opportunity to train our personnel without exposing them to harmful cancer-causing carcinogens found in structure fires,” Farmer said. “Cancer is one of the biggest dangers we face today in the fire service and with this facility, we train our personnel with zero exposure to such harmful chemicals.”

The department was also awarded a grant of $49,000 for a vehicle fire training prop.

Following the ceremony, the fire department performed a demonstration of the new burn building. Cayden Eagles, captain of the department, said he was grateful for the new facility.

“This building is very unique. It creates such as smoky environment with the fog machines that it is nearly impossible for you see what you’re going into,” Eagles said. “It gives the firefighters and trainees the real-life experience of not being able to see in an environment where they’re trying to search for something. They’re working hard and they actually have to put all of their skills to use in order to accomplish a goal.”

After the building was declared “safe,” members of the community were permitted to go inside and tour the structure.