The two men accused in a series of breaking and entering cases now face additional charges.

Cumberland County Sheriff’s Office deputies arrested Howard Al-Tariq Berry and Shai-Yaun Austin, both 18 and both of Cumberland, on Dec. 12 following break-ins and other incidents at businesses along Route 60 in Cumberland. 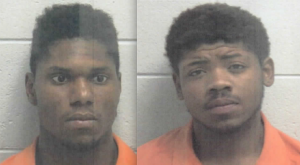 Berry and Austin now also face charges in a fourth break-in, where they allegedly stole items from and vandalized Cumberland Auto Service.

Sheriff Darrell Hodges confirmed investigators have a third suspect in mind, but do not have enough information to arrest the individual.

Online court records indicate Berry is set for a hearing on several charges on Thursday (Jan. 12) and Feb. 16 for others. Austin’s next hearing for all charges is set for Feb. 16.