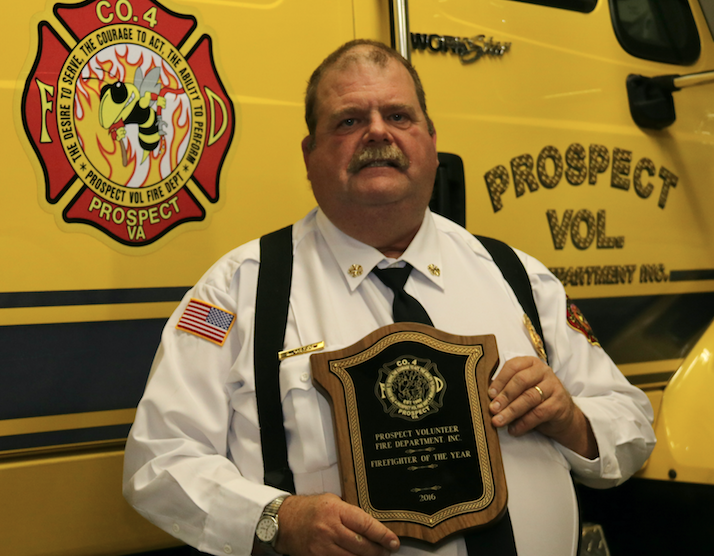 Members of the Prospect Volunteer Fire Department (PVFD) honored Chief Al Mason as Fireman of the Year during their recent annual banquet.

During the event, which celebrates the department’s successes throughout the previous year, new department officers were also installed.

The award came as a surprise to Mason, who said, “It’s an honor to get it, and it means a lot to me, being a firefighter.”

PVFD President Mike Roach said members of the fire department cast their votes by secret ballot during a meeting in early January.

Though he didn’t know Mason was the chosen recipient until it was announced at the banquet, Roach agreed Mason was deserving of the award.

“Al is very well-respected by everyone in the fire department,” he said.

Mason explained that he’s been fighting fires throughout his entire adult life.

“I (became a volunteer) at an early age in Farmville at the junior ranks,” Mason said, “and then I got to the senior ranks down there,” he said. “I moved up here (to Prospect) in 1999.”

“Once you join, it’s in your blood, and it’s just hard to get it out,” Mason said of volunteering and responding to fires.

Roach said during the banquet, Mason told the group his family comes first, but the fire department is a close second.

“He kind of considers (the volunteers) his second family, and it shows because of all the effort he puts into it,” said Roach.

He said Mason cares not only about the department, but also about the members and the auxiliary.

“He cares a tremendous amount about everybody,” Roach said.

“I love doing stuff for the community and for the fire department,” said Mason.

Roach said Mason is always ready to help out in any way he can and takes on a lot of work in the department.