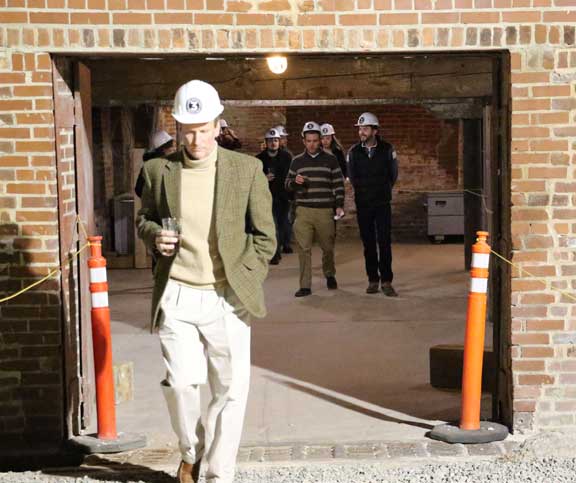 Stan Cheyne walks out of the part of the building on West Third Street that will house the Third Street Brewing Company following a tour Friday evening. Trailing behind him is Joey Siverd, center, and Steve Robertson.

The community showed its interest in the Third Street Brewing Company by showing up in generous numbers for a launch party Friday evening at the Farmville Train Station.

The company aims to open this summer on the bottom floor of what used to be the Southern States building on West Third Street, but Friday’s well-attended event was key to aiding the project’s sustainability.

“This has been very nice,” company co-founder Christopher Sadler said during the party. “I’m happy with the attendance. Our objective here, really, is to build community support as much as anything else.”

Addressing the crowd near the beginning of the party, Sadler talked about wanting to establish beer ambassadors and later expanded on what he meant by that.

“What we really would like to do is have smaller investors,” he said. “So, $100 gets you a share in the bar, and basically, now you’re coming to your bar, as opposed to his bar, some corporate bar.”

Sadler said he and the other company founders want the establishment to be locally and publically owned and spread that ownership out such that it has people who are fans.

“And they’ll tell you what they think you need to do, as well,” he said. “They kind of hold you accountable. So, that’s what I’m thinking about as far as what we mean by the beer ambassadors. So, we’re looking for a financial investment, but of a smaller nature — not thousands or tens of thousands, but maybe hundreds.”
Sadler and fellow company organizers John Dudley, Keith Rider, Gary Elder and Mark Kernohan effectively stoked excitement for the venture through the party, as some of those attending made clear, including Troy Purdom.

“We were really impressed to know that one of the founders and organizers of the brewery is local, so they have an interest in what the community wants and background knowledge on what it needs and how to provide something that the community is not currently offering,” Purdom said. “Upon entering the door, that’s what made us really excited about this opportunity, because it’s local people that are investing in the community.’

Jessica Purdom said, “I think just the ability to create a commerce in a community that needs it is amazing.”

Holding a largely empty glass in his hand, Troy Purdom added, “The product’s not bad either.”

Kyle Davis said he thinks the brewery will be great for the community.

“It’s nice to have things expand out from downtown and come in to the rest of Farmville,” he said. “So, we’re excited. We live in walking distance. We’re going to love walking here.”

Erin Cowling liked the launch party as a first step.

“So far so good, and it’s nice to see local businesses growing in the community,” she said.

Dudley said he had heard everybody’s excited chatter about the brewery coming to the area, “but to see them actually show up at an event is pretty amazing. To have a room full of people like this is very encouraging.”