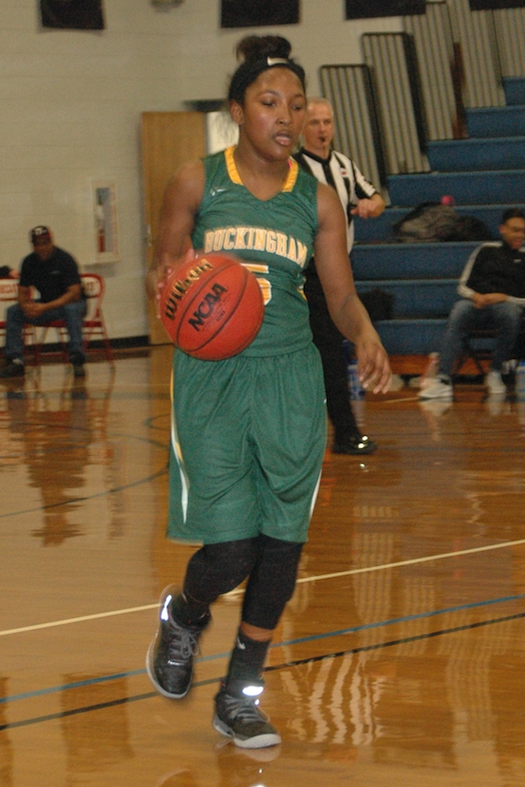 The Buckingham County High School varsity girls basketball team is on a roll. It dropped its first three games of the season, but entered last week’s “Battle of Route 60” showdown at Cumberland High School on a 3-game win streak and made it four with a 43-37 victory over the Lady Dukes.

The win pushed the Lady Knights above .500 for the first time this season, making them 4-3 overall.

It’s a strong start for a squad that has only two returning starters.

“We are definitely a rebuilding team this year,” said Kelly Chambers, Buckingham’s new head coach. From the 2015-16 Lady Knights, “we lost four seniors.”

That iteration of the squad went 7-13 overall, falling in the first round of the Courthouse Conference 37 tournament to Appomattox County High School.

Rather than getting into specifics on goals for postseason advancement this season, Chambers is keeping her expectations focused on game-to-game concerns.

“I just expect to see growth and expect the girls to be competitive in every game,” she said. “We’ll have to see where our competitiveness and our fight takes us.”

It helped them defeat host Central Lunenburg High School 49-47 in overtime, top visiting Bluestone High School 57-23 and edge host Goochland High School 46-43. On Dec. 4, it took them to a key triumph over rival Cumberland (7-3) after they got off to a slow start.

“We were down by seven the first quarter and down by three when we went into the half, and I just felt that we didn’t have the offense going,” Chambers said.

Buckingham mustered only four points in the first quarter and 15 points through two.

“That second half, we came back, and we were more aggressive defensively and (had) quicker hands,” Chambers said, “which led to some fast breaks which put us back into the game.”

The Lady Knights outscored Cumberland 16-6 in the third quarter, entering the final period with a 31-24 lead.

“She was a playmaker for us on both ends,” the coach said. “She made things happen, and her energy ignites the team.”

“Amil is a freshman, and she is our motivator of the team,” Coach Chambers said. “She pushes us through the good and the bad, and she’s just a great person on and off the court.”

Wingfield led the Lady Knights in scoring against the Lady Dukes, recording 13 points to go with five steals, three rebounds and three assists.

“Her quickness gave us an edge on our fast breaks,” Coach Chambers said.

Junior forward Honei Hill made a significant impact in the game, particularly on defense.

“Her presence on the court is what keeps the pieces together,” Coach Chambers said.

Inclement weather led to the cancellation of the Lady Knights’ Monday contest against host William Campbell High School, and their Tuesday game at Prince Edward County High School was rescheduled to Jan. 23.

The Lady Knights are set to host Randolph-Henry High School on Thursday at 7 p.m.

Cumberland is set to host Bluestone High School on Wednesday at 7 p.m.