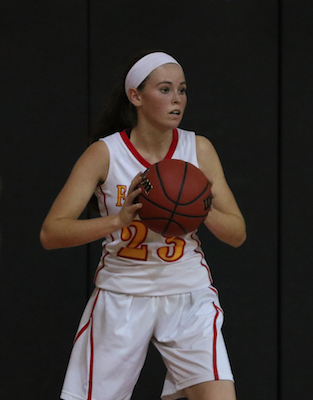 TITUS MOHLER | HERALD Fuqua School sophomore forward Virginia Haney has had to step up with her elder sister sidelined by injury.

The start to the 2016-17 season has been rough for Fuqua School’s varsity girls basketball team due to close and lopsided losses and injury, but it got a bit brighter two games into 2017.

The Lady Falcons recently hosted Holy Cross Regional Catholic School and pulled away early for their first win of the season — a 54-21 triumph.

“Obviously, any time you can get a win it’s a good feeling, especially after everything we’ve kind of been through this year,” Fuqua Head Coach Daniel Eacho said.

Out of their first four games this season, the Lady Falcons lost two by three points and one by four points.

“She was averaging a double-double for us,” Eacho said. “We’ve had to make some adjustments, and some girls have had to take up some more responsibility on the court,” Eacho said.

But he added that the game against Holy Cross was the first instance in which things looked like they were coming together for the Lady Falcons.

“I’ve been trying to get her to be more aggressive as a big man on the court for us this year,” Eacho said of the younger Haney. “She’s definitely one that’s had to take a bigger role with her sister being out.”

Fuqua is also leaning more than ever on its other team captains, senior point guard Anna Cyrus and sophomore guard/forward Sallie Vick.

“To be honest with you, all of the girls have progressed, and we had a very good distribution of scoring in the last game,” Eacho said.

Fuqua (1-8) visited Chatham Hall on Thursday and plays at New Covenant School on Tuesday at 6 p.m.