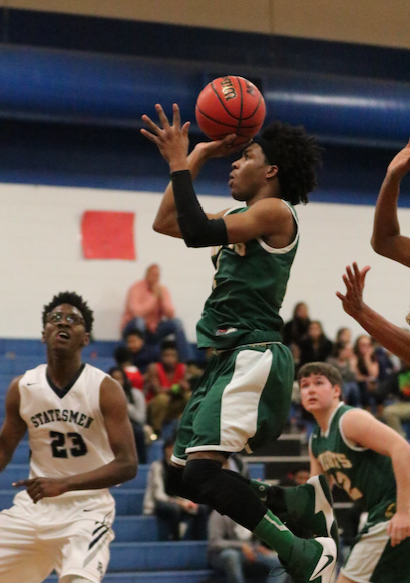 The Buckingham County High School varsity boys basketball team fell 59-51 to visiting Nottoway High School on Friday, but that loss did not overshadow the big road win the Knights had notched the night before.

On Thursday, Buckingham trailed by nine going into the final period against talented Randolph-Henry High School only to come back and defeat the Statesmen, 48-44.

“We used a lot of energy coming back and winning at Randolph-Henry in a real emotional game over there,” Knights Head Coach Russ Gowin said. “That’s always an emotional game with us. Over the years, it’s been a battle.”

“I was so proud of our kids hanging in there when we struggled with our shooting a little bit early in the first three quarters,” Gowin said. “And then that fourth quarter, outscoring them 20-7 was huge.”

“Antonio was superb in that fourth quarter,” Gowin said. “I think he had 16 in that period. He did a great job rallying us.”

A change on defense helped the Knights turn the tide in the final eight minutes.

“We went from a zone defense,” Gowin said. “We gambled and went with a real sticky man-to-man, and it kind of worked. They got cold after we started being real aggressive, and we got hot, and just the two things worked out good together.”

“It’s just hard to get road wins,” Gowin said. “It really is. And if you get one, it’s big, and especially for a young team.”

The coach highlighted his team’s victory over King William High School earlier this season and Thursday’s triumph as signature wins.

Against Nottoway on Friday, the Knights were likely fatigued, but Gowin was not using that as an excuse for his team’s performance against the Cougars, which he said are battling for one of the top spots in the district.