Former Cumberland High School track and field standout Ebony Jones was named the Eastern College Athletic Conference (ECAC) Rookie of the Week, making it two weeks in a row that King University’s women’s track and field team has had one of its members earn the title. 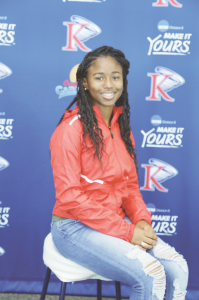 Jones received the accolade as a result of her performance at the Wake Forest Invitational on Saturday. It was only the second meet of her college career, but she extended her personal best long jump, leaping more than five meters for the first time. She posted a mark of 5.03 meters (16 feet, 6 inches) to finish 13th out of 38 — a field that included numerous NCAA Division I athletes.

She also competed in the women’s 200-meter dash Saturday, finishing with a time of 28.34 seconds.