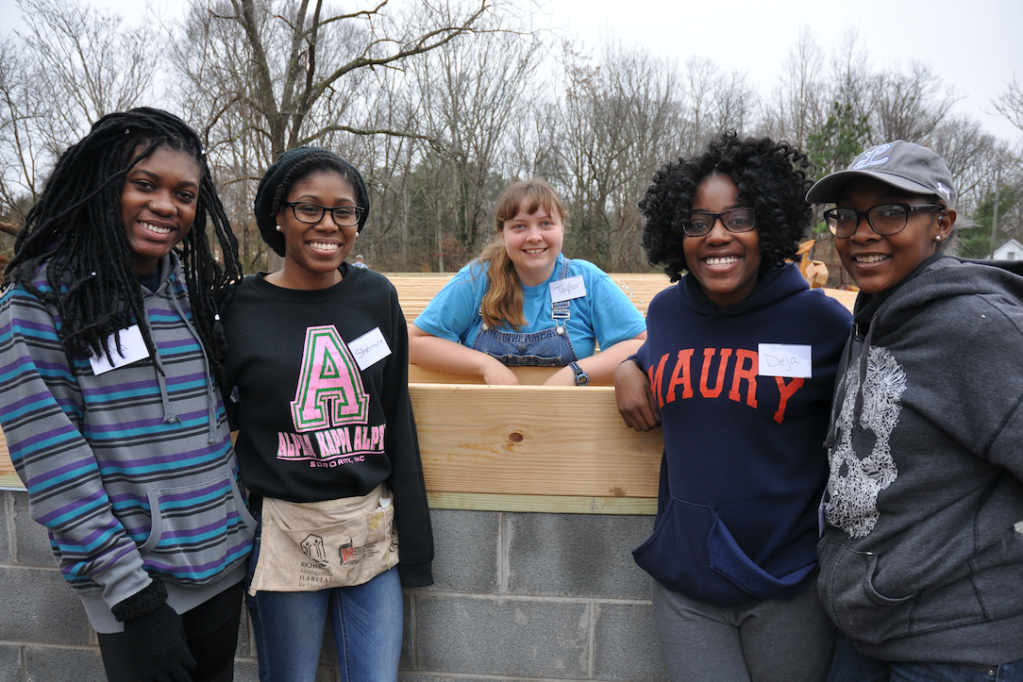 Longwood University students, from left, Aniya Milton, Shermaine Bartlett, Taylor Baver, Deja Mills and Tia Middleton worked on a Habitat for Humanity Home in Dillwyn during the school’s Dr. Martin Luther King Jr. Service Challenge. See more photos of from the day on A9 and online at www.FarmvilleHerald.com.

Led by H-SC student Henry O’Neal, over 20 students, some of whom were from LU, worked behind Prince Edward County High School (PECHS) on an outdoor classroom, one that’s been planned for over a year by physical education teacher Janet Green.

While LU students performed a variety of volunteer projects across the Farmville community, a small group traveled with Dr. Consuelo Alvarez and Dr. Connie Koski to Dillwyn, where the students labored at a Farmville Area Habitat for Humanity site, helping build a home for Marquita Scott and her children.

Green commended the students, who cleared trails, cut cedar posts, drilled holes for a ropes course and fell trees for “working as a team to get this done.”

For O’Neal, who’s organized volunteer projects in other areas of the county, it means a lot to work together in honor of King.

“It really means a lot,” he said. “Part of his dream was to work together.”

Students worked together in the woods between the school and Route 460 carrying large logs they cut, removing stumps, drilling holes and setting up a ropes course.

The outdoor classroom, Green said, will feature a figure-8 nature trail, a community circle and benches. She said the circular benches were being made by Issac Drummond, a Fuqua School student. He’s working on the benches as part of his Eagle Scout project.

“There’s going to be a butterfly garden as well,” she said.

Green’s hope is the classroom will be interdisciplinary for the students who visit.

Alecia Daves-Johnson was a big part of organizing the Saturday effort, O’Neal said. “It all really fell into place …,” O’Neal said.

In Dillwyn, students from LU, along with PECHS senior Henry Lutz, worked on the Habitat home for Scott and her family.

“I’m finally getting excited now,” Scott said of her new home, located on Culbertson Street. “It’s been a long road.”

According to Kemp, the 1,200-square-foot home could be finished by spring.