“The need for this action became clear after Dominion and its partners … in the (ACP) added thousands of pages of additional information obviously prepared before the DEIS was issued, on Jan 10,” opponents said in a joint press release. “The motion also requests that the FERC ‘hold the public comment period in abeyance’ until the supplemental DEIS is issued.” 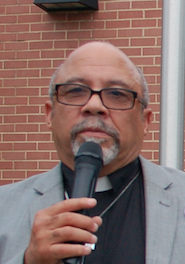 The motion was filed Monday with FERC.

“The Union Hill (and) Union Grove community’s historical and cultural resources, as well as environmental justice issues, were ignored by Dominion and FERC in the DEIS released Dec. 30,” said Pastor Paul Wilson, a CNG member who preaches at Union Hill and Union Grove Baptist churches in the area of a proposed 53,783 horsepower compressor station, needed to help transport gas through the pipeline.

“We plan to continue to fight the proposed pipeline and compressor station. This motion to rescind the DEIS is one of the steps in that process.”

FERC, in the DEIS, concluded in December the ACP’s impact would be “less than significant.”

County supervisors in Buckingham recently voted to allow a special use permit to allow the compressor station to be constructed along Route 56 between Shelton Store and Union Hill roads. Speakers in opposition greatly outweighed those in favor of the permit in public hearings before planners and the board of supervisors.

According to the motion, there are “significant new circumstances or information relevant to environmental concerns and bearing on the proposed action of its impacts … At the same time, the present public comment period should be placed in abeyance until a new or supplemental DEIS is issued.”

“The FERC staff concludes that construction and operation of ACP … would result in temporary and permanent impacts on the environment, and would also result in some adverse effects. With Atlantic’s and DTI’s (Dominion Transmission, Inc.) implementation of their respective impact avoidance, minimization and mitigation measures as well as their adherence to our recommendations to further avoid, minimize and mitigate these impacts, the majority of project effects, with the exception of impacts on forest vegetation, would be reduced to less-than-significant levels,” the commission staff said in its release.

According to the motion, on Jan. 10, “Dominion filed an additional 14 documents supplementing its original application. This filing of new information contains thousands of new pages of information, voluminous appendices and attachments on environmental issues directly relevant to the DEIS.”