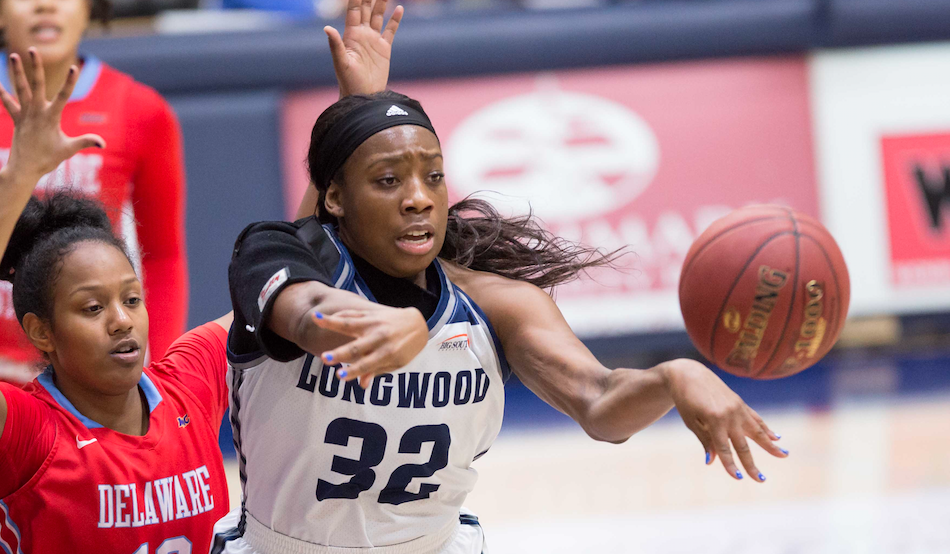 MIKE KROPF | LONGWOOD UNIVERSITY Longwood University senior forward Eboni Gilliam passes the ball against visiting Delaware State University on Dec. 28. She scored 18 points in that win and poured in a season-high 19 on Saturday in a 71-47 Lancer victory over visiting Milligan College.

Behind a season-high 19 points from senior forward Eboni Gilliam and a 13-3 run during the final two minutes, 15 seconds of the first half, Longwood University’s women’s basketball team rang in the new year with a 71-47 win over NAIA No. 23 Milligan College on Saturday afternoon inside Willett Hall.

“This was a great way to finish non-conference play,” said Longwood Head Coach Bill Reinson. “I thought, other than the fouls, we did a very good job defensively in the second half. Offensively, we made some poor decisions, but we shot the ball well for the second game in a row.”

A product of Richmond, Gilliam bettered her 18-point outing in Wednesday’s win over Delaware State University with a 19-point performance that saw the senior finish 8-of-14 from the floor with six rebounds, two assists and a steal. 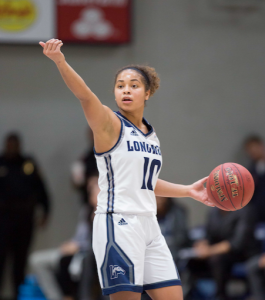 “Eboni was very good offensively,” Reinson said. “She has been shooting the ball very well.”

The performance for Gilliam marks her third straight with 15-plus points and the sixth time in Longwood’s last eight contests that she has bettered 10 points. During the eight-game stretch, Gilliam has averaged 11.8 points per game to go along with a .439 shooting percentage to move into the top 10 in the Big South this season.

“I’ve been able to find an offensive rhythm over the past couple weeks, and I’m trying to stay consistent,” Gilliam said. “I’m trying to get into the gym as much as I can so that I can help my teammates.”

Gilliam and a five-block day from Longwood freshman guard Khaila Hall spearheaded the Lancer defensive effort that held the Buffaloes to .266 shooting, marking the first time the Lancers have held an opponent under .300 this season. Longwood (3-8) frustrated Milligan (10-6) by forcing 22 turnovers. The Lancers also bettered their conference-best 8.8 steals per game with 10 steals.

Coming off a career-high 15 points in Wednesday’s win over Delaware State, Hall had a game-high six assists Saturday to go along with her five points and five blocks in 27 minutes. Her six assists led to 14 Longwood points, with Gilliam and freshman guard/forward Dayna Rouse combining for 11 of those points.

“I just tried to stay focused out there and help my team win,” Hall said Saturday. “It’s nice to win two in a row, so hopefully we can keep the momentum going into conference play next week.”

Rouse finished with 13 points on 6-of-12 shooting, and junior guard Micaela Ellis added 10 points to go along with four assists and a steal. 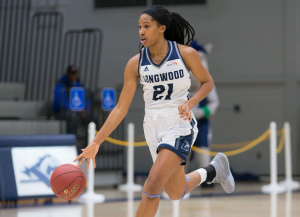 “Dayna Rouse put up some good numbers, but she’s capable of much more,” Reinson said.

Coming into the game ranked among the top five in the Big South in assists, steals and minutes played, Ellis scored in double figures for the second consecutive game and finished with four or more assists for the fifth time this season. Together, Ellis and Hall combined for 10 of Longwood’s 13 assists throughout the afternoon.

“Our two point guards played extremely well,” Reinson said. “Micaela Ellis has established herself as a quality point guard. Khaila Hall has been stuffing the stat sheets for a while now. She continues to improve every game.”

With the conclusion of the non-conference schedule, Longwood looked to ride the momentum from its back-to-back wins into Big South play, which opened for the Lancers on Tuesday at Presbyterian College.

Longwood continues its conference schedule Saturday at 2 p.m. when it hosts University of North Carolina at Asheville.