Fuqua takes on the Big Apple 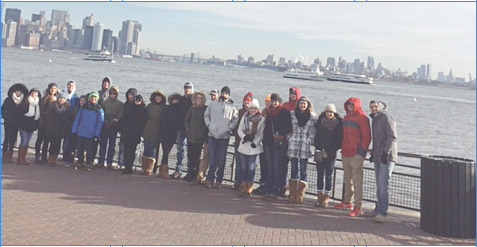 Members of the senior class, as well as visiting exchange students, went on the trip in mid-December.

Jenning Custis, a history and government teacher at Fuqua, planned and led the trip.

“While in the city, we attended several shows on Broadway, including ‘Jersey Boys,’ ‘Aladdin,’ and ‘On Your Feet,’” Custis said. “We also took in a Rangers hockey game.”

Two full days of the travel were dedicated to touring the city and stopping at several famous landmarks.

The students and their chaperones saw the Statue of Liberty, Wall Street, the Little Chapel That Stood, Trinity Church, Central Park and the 9/11 Memorial. They also took a trip to the top of the Freedom Tower observation deck.

Students had the opportunity to tour Madison Square Garden behind the scenes and see the arena from all levels, Custis said.

“Other highlights included the Intrepid Air and Space Museum and Madame Tussaud’s Wax Museum, along with a visit to the Today Show and shopping in Times Square,” Custis said.

“The trip is an opportunity for students in a rural area to see a big city and experience culture along with seeing landmarks that have been discussed in numerous classes,” he said.