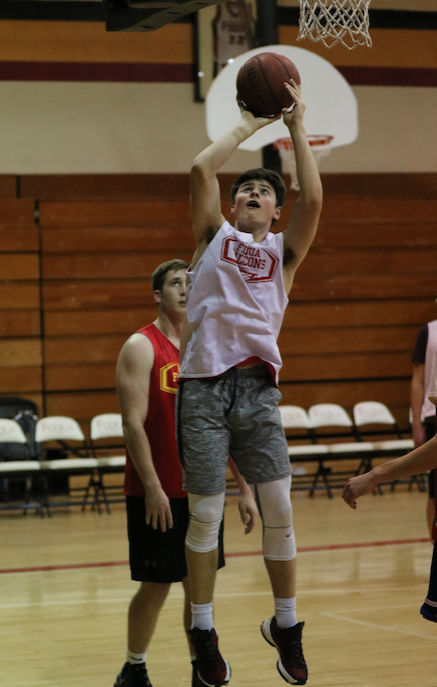 The Fuqua School varsity boys basketball team has created a good start to the 2016-17 season, going 6-1, while winning by an average of 23 points.

“As a team right now, I like where we’re at,” Falcons Head Coach Charles Thomas said. “We still have to grow. We’re still not where we want to be, but that’s OK, because I think right now we don’t want to be peaking. We don’t want to be as good as we can be right now. We want to be there towards the end of the season.”

But through their play, the Falcons have certainly made convincing arguments to their opponents that they are already pretty good, defeating Brunswick Academy 78-55 in their most recent game, which was played Jan. 4.

“Our kids have done a good job so far, doing what we asked them to do and locking in and being focused,” Thomas said.

He noted he is pleased they are playing well as a team, sharing the basketball. Senior power forward Julian Gee, junior point guard Tyler Thomas and sophomore guard Chipper Ford have all been leaders on the team, but the list of key contributors does not stop with them.

“We’ve got some other guys that are playing key roles that are right around that eight- or nine-point mark per game,” Coach Thomas said. “I think we have decent balance.”

Junior wing guard Jalen Patteson, who started for the Falcons last year, had knee surgery before the holiday break, leaving a hole in Fuqua’s lineup.

“We moved Clay Osborn up from the (junior varsity team), and he’s had to start for us every game, and he’s done a great job of stepping into that role,” Coach Thomas said.

The coach also praised the play of senior forward Ed Newman in the game against Brunswick.

Coming off the bench, junior forward Hunter Gilliam has been athletic and helpful defensively.

The contributions from players outside of Gee, Thomas and Ford have been key, keeping the Falcons from being one-dimensional.

Fuqua hopes to have Patteson back in a few weeks, giving it more depth in the backcourt.

The one loss on the Falcons’ record came with a final score of 50-44 against Bruton High School, a public school in the Virginia High School League’s Group 4A classification. The game was part of the Fluvanna Christmas Bash on Dec. 28-29, held at Fluvanna County High School.

“I think that tournament was good for us because I thought we played some bigger high schools that had some good athletes,” Coach Thomas said. “I think it kind of exploits your weaknesses and lets you know where you’re at, what you need to go back and work on, for sure.”

He said the loss to Bruton showed the Falcons they needed to work on their offense, fixing their timing while also grasping the purpose of certain plays rather than just running them.

After inclement weather kept Fuqua from playing Monday and Jan. 6, it is set to visit New Covenant School on Friday at 7 p.m.