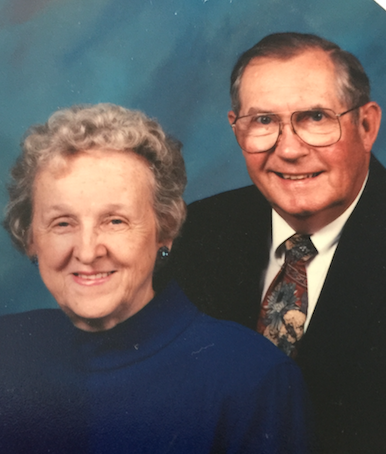 John and Dorothy Morgan were “a match set,” according to Martha Pennington Louis. Dorothy preceded John in death.

Buckingham native John C. Morgan Jr., who died recently, is being remembered by the community for his mentorship, love of education, community- mindedness and giving to others.

Morgan was “a mentor for many of us that came in or worked in the school system during his time there,” said Spencer Adams, a former educator and school administrator, who worked with and was taught by Morgan.

Both Adams and Morgan served as principals of Dillwyn Primary School.

“He was my sixth- and seventh-grade teacher before be became a principal at the old Buckingham Primary School,” Adams said. 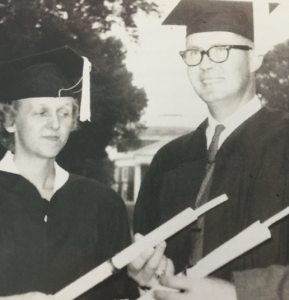 John and Dorothy Morgan stand at the University of Virginia after receiving their master’s degrees.

For 33 years, Morgan worked in numerous levels of public education in Buckingham, retiring as the division’s director of instruction in 1984.

Morgan, who graduated from Buckingham Central High School in 1943, was immediately drafted into the Army, according to his obituary. He served for three years in World War II. After his years in the service, including a year in Germany, he returned home to attend VPI under the GI Bill. Morgan and his late wife, Dorothy, came back to Buckingham in 1952 after being away because of college and the war. Morgan taught sixth grade at Arvonia Elementary while his wife taught fourth grade at Buckingham Elementary.

“John moved to the Buckingham Elementary School where he taught the sixth and seventh grades for five years,” according to an account of his career. “He became principal of the newly constructed Dillwyn Elementary School in 1957 and served in that capacity until 1962.”

Adams and Morgan worked on numerous projects and initiatives for HBI over the years.

“I just heard from him a week or so ago as far as making a significant contribution toward one of our projects,” Adams said. “He always treated people fairly and always was encouraging in every respect, guiding them in their effort.”

“John was a godly man, who was a role model for all,” said Nancy Anderson Haga, who taught in Buckingham and Farmville, and is Morgan’s former sister-in-law. “His temperament was always the same and he was the stabilizing force in our family. We will miss him greatly.”

“I considered Mr. Morgan as a very compassionate and dedicated educator,” said Pat Johnson, who taught for many years in Buckingham. “He earned the respect of his students by making each one reach their full potential. As an administrator, he was a true example of effective leadership — always treating everyone with respect. I have never heard anyone say a negative comment about him. He was a role model.”

According to HBI President Martha Pennington Louis, Morgan was the organization’s first stewmaster “way back when we had stews at the museum. We didn’t have the historic village,” she said. “That was a part of what he and Tom Hall did,” Louis said, noting Morgan loved helping cook the stew.

“He was always ready to lend a hand to help us with events when he could.”

Morgan made “some pretty big donations to the Historic Village … He financially helped us,” Louis noted.

“He was part of a match set,” she said of the Morgans, noting the two were like “salt and pepper.”

A memorial service was held Saturday.

According to an account of his career, Morgan was instrumental in organizing the county’s first Parent Teacher Association at Dillwyn Elementary.