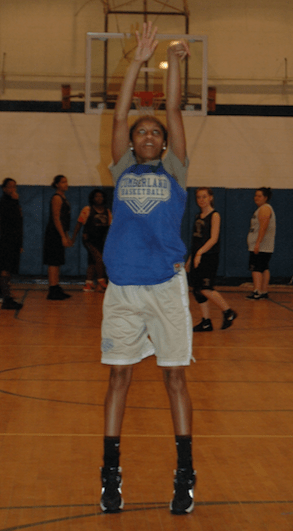 The Cumberland High School varsity girls basketball team is off to a 7-2 start to the season after completing the 2016 portion of its schedule.

The good start puts Cumberland on track to improve significantly over its performance during the 2015-16 season when it finished 10-11 after falling to Mathews High School in the Conference 42 tournament semifinals. The Lady Dukes were the No. 5 seed.

Cumberland remains strong this year, though, with a roster dominated by upperclassmen.

“From the kind of team I’ve got, I’m looking for us to really, really get a little deeper this year in the playoffs than we have in the past, being that my seniors are pretty much all four-year starters, so they’ve all been there, done that,” Liggins said. “So, I’m hoping we can get a good two or three seed … then that would leave us home for most of the playoffs.”

This would help eliminate some of the extensive travel leading up to games that Liggins said has caused problems for his team in the past.

Leading the Lady Dukes this year on the court has been senior shooting forward Infinity “Bria” Anderson, who has been a four-year starter.

“Right now, she’s leading my team in just about every stat possible,” Liggins said, adding that she averages around 19 points and close to eight rebounds and eight assists a game.

He said she has the versatility to play any position.

Liggins highlighted senior center Tayziana Booker as someone he is also leaning on to help the team succeed.

He counts on junior point guard Olivia Sims to handle the ball and control the game, making sure everybody is where they are supposed to be on the court.

Liggins cited freshman Imani Ingalls as an up-and-comer from whom he is expecting big things because of her height, which he estimated as being 6 feet and one to two inches.

The coach also put a spotlight on sophomore forward Nadia Elasha because of her energy on defense.

Cumberland hosts Buckingham County High School on Wednesday at 7 p.m. in what Liggins noted is always a big rivalry game that has tested the conditioning of both teams.

Recalling a past contest against the Lady Knights, Liggins said, “It just came down to what team was going to have the gas at the end.”

He said his team’s big test will come Friday when the Lady Dukes visit Nottoway High School to play the Lady Cougars, a team he identified as “hands down the best” in the James River District.

“I just feel that they are the best team until somebody beats them,” Liggins said.