Construction bids will come this month 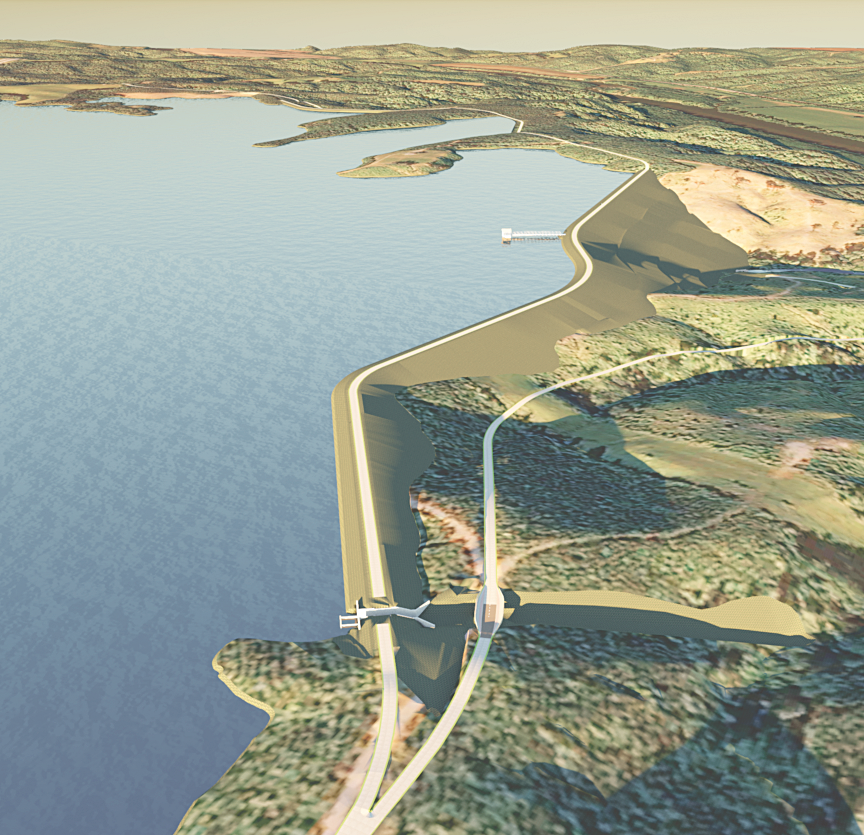 HENRICO COUNTY A computer-generated graphic depicts the view of the future Cobbs Creek Reservoir in northwestern Cumberland County looking west across the proposed dam. The spillway is in the foreground, then the main dam. The structure protruding out in the water is a bridge leading to an inlet/outlet tower. Henrico County owns the reservoir, paying Cumberland County $1.13 million in order to use the reservoir to add water to the James River when necessary.

There’s been a slight delay in work on the Cobbs Creek Reservoir project in northwestern Cumberland County, but it appears it won’t adversely affect projections for a late 2021 to early 2022 completion date.

The $280 million, 1,117-acre reservoir project will encompass a little more than 15 miles of stream bed, according to a Virginia Department of Environmental Quality (DEQ) permit. It will permanently impact 15.3 miles of stream, almost 31 acres of wetlands and 4.6 acres of open water, according to the permit.

Henrico County acquired the project from Cumberland County in 2010, which is designed to release water into the James River to augment flow during dry summer months or periods of drought. When river flow is sufficient, the reservoir’s supply will be replenished. According to an agreement between the counties, Henrico began paying Cumberland $1.13 million in annual contractual payments in lieu of taxes starting in 2011 and will continue to do so through 2060, for a total of $56.595 million.

Last July, Henrico County Department of Public Utilities Capital Project Manager William “Ed” Overmann said the latest step — relocation of utilities — was expected to be completed by the end of 2016. At the time, Overmann also said construction of the dam and facilities was to be started in March.

Overmann said construction bids will be received in February.

“The contract is expected to be awarded in the spring … with construction beginning (in) early summer. Completion of the project is expected in late 2021 or early 2022,” he said.

Overmann said interest in working on the project is high.

“Henrico County held a pre-bid meeting for the main contract on Nov. 17 … that created a lot of interest,” Overmann said. “Approximately 130 persons attended the meeting representing companies from Maine to Georgia (and) as far west as Montana and Colorado.”

In previous interviews, Overmann said a $5.2 million utility corridor preparation contract went to North Carolina-based Thalle Construction Co. A $32 million contract went to Texas-based Primoris Service Corp. to relocate the pipelines for Colonial, the process that should be completed in the coming weeks.

Meanwhile, Cumberland County is working on adopting a Watershed Protection Ordinance for the reservoir.

Last July, County Planning and Zoning Administrator Sara Carter said Cumberland was waiting on the Henrico County attorney’s office for a draft. She also said administrators were working on a comprehensive plan amendment for the northern part of the county to address the area’s changing land uses.

At the time, Overmann said Henrico and Cumberland officials were coordinating on details for recreational opportunities at the reservoir, which he expected “to be open to the public from dawn to dusk, seven days per week, with fishing, boating and swimming in designated areas.” He also said Henrico and the Virginia Department of Game and Inland Fisheries were collaborating on construction of a boat launch facility and that the state planned to stock the reservoir with fish.

According to a copy of a 2010 memorandum of understanding (MOU) on Cumberland’s website, Henrico intended to enter into an agreement with Powhatan County to provide an annual average of 10 million gallons per day (mgd) of water from the reservoir. The MOU also gave Cumberland the right to request Henrico provide it with an average of 7 mgd from the reservoir as well, with Henrico reserving use of an average allocation of 30 mgd of raw water.

If at any point Henrico determined it no longer needed the reservoir, the MOU stated the county “shall offer to sell all or part its property to Cumberland at fair market value.”

Henrico County also submitted a buffer management plan to DEQ in 2013 “to achieve water quality protection and for controlling and abating the discharge of pollutants.” Henrico intends to maintain a 150-foot wide reservoir buffer resulting in an estimated total buffer area of approximately 295 acres, compared to the 1,117-acre normal pool area.