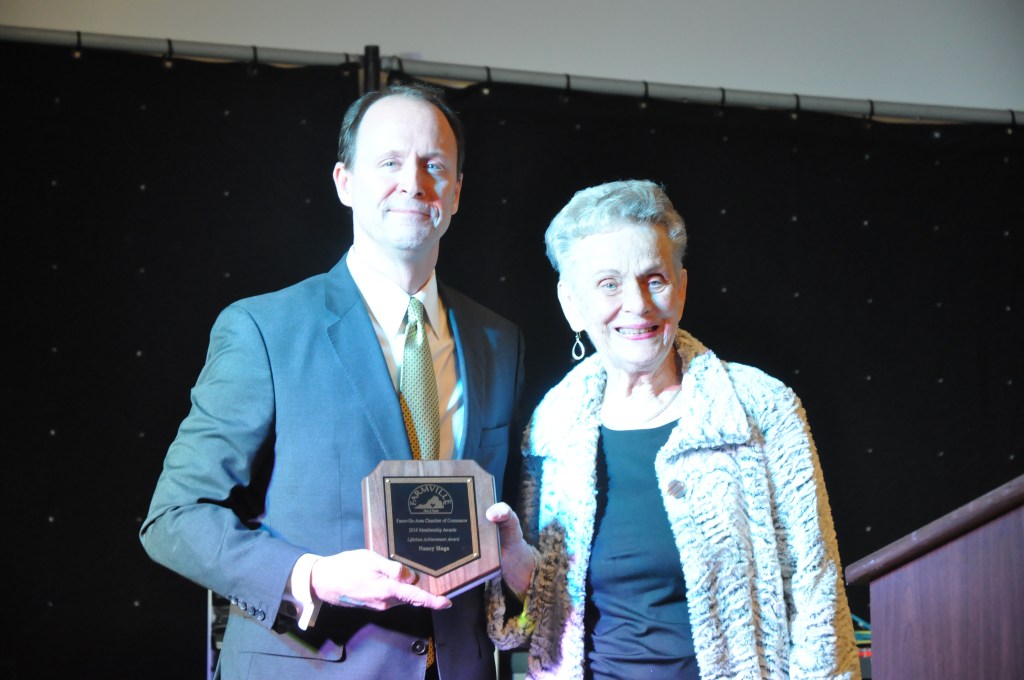 JORDAN MILES | HERALD Dr. Nancy Anderson Haga received the Farmville Area Chamber of Commerce’s Lifetime Achievement Award on Friday. Brad Watson, chairman of the chamber’s board of directors, presents her with the award. See more photos from the event on A6 and online at www.FarmvilleHerald.com.

Editor’s Note: This is one installment of three The Herald will publish featuring the three lead award winners from the 2016 Farmville Area Chamber of Commerce’s Awards Banquet. On Friday, we will feature Kerry Mossler, the 2016 Member of the Year.

Business and community leaders on Friday honored the selfless work, dedication and mission of service to others that Dr. Nancy Anderson Haga has fulfilled and undertaken for many years in the Farmville area.

Haga was presented with the prestigious Lifetime Achievement Award from the Farmville Area Chamber of Commerce during the chamber’s inaugural New Year’s Eve Eve Party, held at the Firemen’s Sports Arena.

The award is not one handed out annually or on a regular basis, said Brad Watson, the chairman of the chamber’s board of directors. The award, he said, honors someone who has “gone above and beyond in their service to their customers, the chamber and to the people of this area.”

“For those of us in the business world, we often gravitate toward numbers and metrics,” Watson said, prefacing that he had known Haga and her sons during his entire lifetime.

According to Watson, Haga joined the Prince Edward Volunteer Rescue Squad 33 years ago, the second woman accepted into the squad’s membership. Haga, Watson said, has run an estimated 2,500 emergency rescue calls to help people in distress. She served as the squad’s treasurer for 30 years.

“A few nights ago, when most of us were home with family, Nancy was on call waiting for an emergency to respond to … She’s 81 (years old) and still doing that. And I think that’s pretty fantastic,” Watson said.

For 44 years, Haga taught at Fuqua School and Longwood University, he said.

“Speech, communication and debates were her specialty. One of her sons estimated that 13,000 students learned to speak, dabbled in the art of persuasion and built self-confidence because of her assertive, some may call it a little pushy, style of teaching. Ninety-five percent of those students were hosted in her house.”

Haga’s Sunday School class “has been active in our community, supporting families and causes with their time and their money,” Watson said.

Haga has opened her home to about 200 people and families in distress, he said.

“Known by her family as ‘The Basement People,’ these folks were adopted for weeks and sometimes for months at a time because they were experiencing hardships, due to financial problems, addiction issues, fiscal abuse … (or) their homes burned down,” he said.

The hundreds who came through “found a warm home,” Watson said, profiling the Bowles family, who were awaiting the completion of their Habitat for Humanity home, which was supposed to be only 10 weeks late, but in actuality, was 18 months late. That’s were Haga came in, allowing the family to move into her basement while their Habitat home was finished.

Serving as the inaugural Christmas Mother for the Farmville area this year, Haga’s efforts resulted in 230 families having a brighter Christmas.

“Those are the numbers you find from the research. But, equally as impressive are the hundreds of acts … private, anonymous acts of kindness known only by the recipient. People who had a power bill paid when a spouse lost their job. People who found money in an envelope when their car broke down. People who got a perfect book to help them deal with their crisis. Shut-ins who were lonely and had a surprise visit and got a chocolate pie … and people who got a visit from a minister when it wasn’t obvious that they were struggling,” Watson said.

He said if Farmville had a team of people who provided service to others, “tonight, we would be retiring the jersey of Dr. Nancy Anderson Haga. We don’t have a jersey. But we do have an award, not (for) a business leader, but a community leader, one who has done so much to make Farmville a better place to live, a kinder place to live.”

A standing ovation followed Haga’s rising from her chair to receive her award.

“Thank you so much … I’m really overwhelmed,” she said. “Farmville is a wonderful place to live because of the chamber of commerce, of the businesses all seated in here today and the people who run those businesses.”

Haga said her life had been “wonderful in Farmville … I’d like to thank you for this award, all of you.”