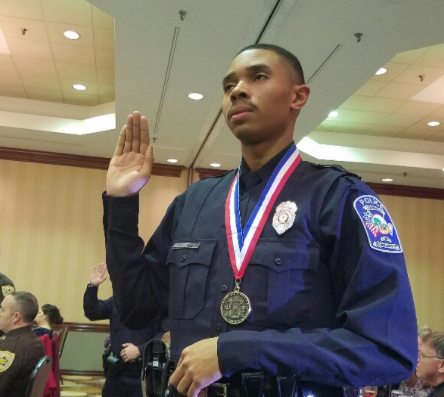 Peter Carter, who graduated from Prince Edward County High School in 2012, trained with his fellow graduates in the 88th class of the Central Virginia Criminal Justice Academy.

“I am excited to have Officer Carter join our staff here at the FPD,” said Chief A.Q. “Andy” Ellington. “I am proud of his achievements and accomplishments in completing the 28-week Basic Law Enforcement Academy.”

According to Ellington, Carter placed first in his class in defensive driving.

“Peter is a very pleasant and bright young man, and I feel he will be perceived well by his fellow officers and the public. I look forward to working with him,” Ellington said. 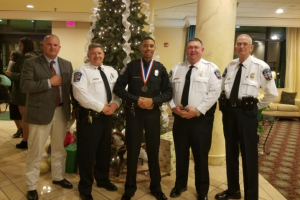 The academy prepares individuals for careers in law enforcement, jail, civil process, court security and dispatch, according to a town press release.

“I’ve spent the last six months in academy,” Carter said, calling it “very challenging” and “a great opportunity and experience.”

“It’s a very good department … From the moment they hired me, they made me feel at home,” Carter said.

He added, “It’s a lot of pressure on me right now. I’m probably, like, the youngest officer in the department right now.”

Carter said he was very grateful and knew the experienced law enforcement officers in the department would help him through his “journey.”

According to Ellington, Carter will now participate in 14 weeks of field training. “He (began) this process Jan. 4 at 7 p.m.,” Ellington said.