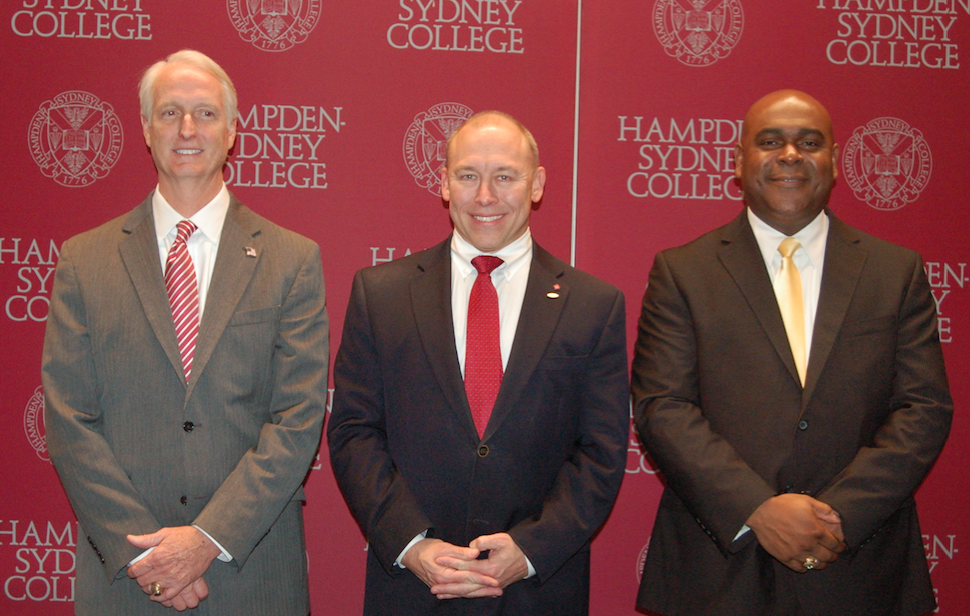 Republican Mark Peake, of Lynchburg; Democrat Ryant Washington, of Fluvanna; and independent Joe Hines, of Rice, answered questions on a number of issues during the forum, co-sponsored by The Farmville Herald and H-SC’s Wilson Center for Leadership in the Public Interest.

Wednesday’s event was the only District 22 forum to include all three candidates seeking to win the special election to fill the seat, formerly held by U.S. Rep. Tom Garrett. The special election, announced in December, will take place Tuesday. The Virginia General Assembly convenes the following day.

About an hour into the forum, moderator Jordan Miles, The Herald’s senior staff writer, asked how the candidates would protect women’s reproductive rights if elected to the State Senate.

“A woman’s reproductive rights are her rights. I’m not a medical doctor; I’m the first to admit that. I’m not a woman, as you can see,” Hines said, drawing some laughter from the audience, “but I do think there are certain cases … it comes down to faith, family, doctor and the circumstances under which she’s dealing with.”

Washington agreed, also pointing out he is not female.

“The decision should be between a woman and her physician. It’s her choice, not mine,” he said. “I do think government has a role, but only in the safety of the woman from some regulatory standards.”

Washington said he would not support legislation interfering with a woman’s reproductive rights.

Peake, on the other hand, said he has always been pro-life and did not agree with the term “reproductive rights.”

“I believe in protecting the rights of the unborn,” Peake said. “If ‘reproductive rights’ means their right to have birth control, I don’t have any intention of interfering with a woman’s right to obtain birth control. But, if it means allowing a woman the right to abort unborn children, I’m opposed to that subject.”

All three candidates said they would need to review newly proposed legislation in the Virginia House of Delegates which would restrict transgendered people from using bathrooms of their choice in schools, rest stops and government buildings. Peake firmly supported such legislation.

“Use the bathroom with the private parts you have,” Peake said. “I will support a bill — you’ve got private parts, that’s the bathroom you’re going to use. You don’t get to pick the bathroom you’re going to use depending on how you feel that day. That is absurd. It is absurd that the federal government would issue a proclamation to our schools in the state of Virginia — in Farmville, Lynchburg or Buckingham — that the president would tell you that if somebody that day feels like a boy or if they feel like a girl that day, they get to use that bathroom. It’s insane.”

In addition to opposing such a bill on principle, Washington said the economic consequences to Virginia would be “devastating” if passed. Hines said he does not believe in discrimination, but also said he felt a similar bill in North Carolina did not go through the proper legislation process.

Another subject where Peake differed from Hines and Washington was on whether a bi-partisan commission should be formed to handle redistricting after the 2020 Census instead of leaving such work to legislators.

Peake said he would not support the formation of such a commission.

“There is no commission that you could put together that is bi-partisan,” he said, adding the process is laid out in the Virginia constitution.

Peake said Democrats divided Lynchburg between the 22nd District to the east and another district to the West Virginia border in order to place three Republican senators into one district.

“Which they did, and then two of them moved into neighboring districts and one of them became a Democrat,” he said. “And that’s the problem with a lot of things the government tries to do and a lot of things liberal Democrats try to do. They don’t think through it.”

Hines and Washington both supported the idea of a commission.

“Is gerrymandering going on? Absolutely,” Hines said, adding one of the reasons he’s running is that he has worked in all areas of the district and, therefore, understands the district’s issues, especially from an economic standpoint.

Washington also agreed gerrymandering has taken place, saying while there are some similarities in different parts of the district, there are also a lot of differences.

Other highlights from Wednesday’s forum included:

• Expanding Medicaid — Hines said the issue is “very complicated” and he needed to look at actual proposals in terms of how it would affect businesses. Washington said he did not know why Medicaid was not expanded in Virginia but expressed more concern about providing access to healthcare for everyone. Peake said he would never vote to expand Medicaid, calling it a “disaster.”

• Atlantic Coast Pipeline (ACP) and compressor station — Washington said he is not in favor of the project in its current form, adding there are still a lot of questions to be answered. Peake said the Senate would have little to do with the project since the U.S. Congress approved the route and the Federal Energy Regulatory Commission is studying it for approval; he also said he is a “staunch supporter” of personal property rights. Hines also said he wants to protect property rights and would want fair compensation for property owners, but also believes the ACP could have a “phenomenal economic impact” on the state and district.

• State minimum wage increase — Peake said it is not the government’s duty to impose wages but a decision for individual private businesses, and said raising the minimum wage could have “unintended consequences” because owners would “figure ways around things.” Hines generally agreed with Peake, but would need to see specific legislation to comment further. Washington said he was not sure what the minimum wage should be, but that “people cannot live off of $7.25 an hour.”

• Raising taxes — Washington said raising taxes should be a “last resort.” He said government needs to make sure services, especially core services like public safety, are funded, but said Richmond should look at ways to streamline things. Peake said he could “not think of any situation” where he would raise taxes, saying the state has more of a spending problem than a revenue problem. Hines said he generally agreed with both of his opponents and focused on finding ways to cut back on regulations to make things easier for businesses to thrive.