Cumberland High School’s varsity wrestling team has a powerful motivation as it takes to the mat this season. The Dukes are looking to establish a strong reputation and shake things up at the state level.

“We have a motto this year for the team,” Cumberland Head Coach Charles Taylor said. “It’s ‘Breaking the Favoritism,’ because we’re in Cumberland and not a lot of people know who we are as a school or as a wrestling program, so we want everybody to see us break the favorites for the state, the way that we wrestle and the way that we come onto the mat.”

The Dukes have a record of 8-10 this season, despite being able to fill only nine of 14 weight classes. For team scores, a forfeited weight class gives the opposing team six points.

Trevon Foster won the regional championship for 1A East and placed fourth in the state.

The Dukes lost one captain from last year’s team to graduation, but with a wealth of talent returning, Taylor said this is “not really a building year. It’s more a continuing-what-was-started-last-year year.”

The team has a diversity of ages, featuring three seniors, three juniors, two freshmen and one sophomore.

Understanding what it takes to succeed on the mat, Taylor makes sure not to put a cap on his expectations for his wrestlers. 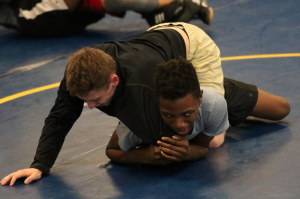 He said he expects his three state qualifiers from last year to repeat those accomplishments this year, and also highlighted senior 113-pounder Ricky Kirby and sophomore heavyweight Kaijhaun Trent.

“I’m waiting to see a little bit more out of some of the other ones, but (those are) at least five guys right now that I feel really good about that could make it to states this year,” Taylor said.

Kirby is undefeated so far this year, holding a record of 17-0.

“He has a good knowledge of where to put himself, and when he’s in a placement where he can’t control the match, he’ll find a way to cause everything to be restarted,” Taylor said, noting Kirby does not panic anymore on the mat.

In his third year as a wrestler, Kirby is from New Jersey. He transferred to Virginia his sophomore year and has been a leader for Cumberland’s team, willingly helping his teammates with their moves.

“He’s selfless and not selfish when it comes to the team,” Taylor said.

Trevon Foster has been sidelined this season due to a knee injury, but he has been working his way back and made his first competitive appearance on the mat Saturday when Cumberland competed in the Matt Brown Memorial Duals at Franklin High School. He went 4-1.

“It’s been an up-and-down climb for him this year, and I’m so excited to have him back on the team for him to be able to wrestle,” Taylor said.

Trent drew high praise from Taylor for his success in the heavyweight division as a sophomore, particularly with him being much lighter than the class’ defining weight of 285 pounds.

“He’s at 227 pounds right now,” Taylor said. “He was larger last year, but he’s been trying to lose weight for himself. But right now, he’s just trying to bulk up.”

Trent has a record of 12-3, and Taylor said, “He, definitely, is somebody that people should watch out for.”

Another Cumberland wrestler to watch is junior Davidrick Brooks, who holds a 9-9 record wrestling in the 126-pound weight class.

“He went to states his freshman year,” Taylor said. “This year, his record isn’t as good as it could be, but we’ve placed him against a lot of state-level talent this year, so it’s been a rough year. But I’m using it to help build him to be a better wrestler, not to break him down as an individual. And I can see the growth that it has had.”

At the Matt Brown Memorial Duals on Saturday, he was down in points in a match but came back, forced overtime and won.

The Dukes hit the road and compete Saturday in the Rural Retreat Invitational, an event which will feature Rural Retreat High School, the defending 3-time VHSL Group 1A state champion.

“This is going to be an exciting weekend for us and the guys and definitely going to be able to (bring) that motto “Breaking the Favoritism” to life,” Taylor said.