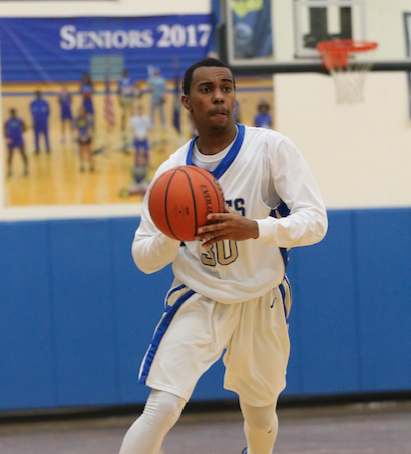 The varsity boys basketball “Battle of Route 60” at Buckingham County High School was competitive for a while, but then the Knights pulled away for a decisive 65-41 victory over Cumberland High School last week.

“We were really, really pleased with our kids,” Buckingham Head Coach Russ Gowin said. “It’s a rivalry game, and whenever you play your next door neighbors, it’s an emotional game, and it’s just a big win for us.”

After starting the season 1-5, the Knights are now on a three-game win streak.

“Being such a young team, we want to continue to build, and we’re doing that,” Gowin said. 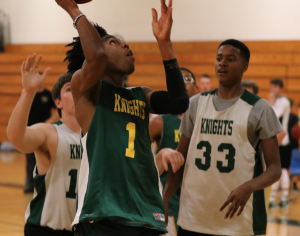 TITUS MOHLER | HERALD
Buckingham County High School senior guard Antonio Chambers, No. 1, was a big difference-maker for the Knights in their 65-41 victory over visiting Cumberland High School during the “Battle of Route 60” on Jan. 4.

The game was tied 11-11 after the first quarter, but Buckingham asserted itself in the second to take a 26-18 lead at halftime. The Knights added three points to their lead after the third quarter and then outscored the Dukes 25-12 in the fourth.

“I thought we could have done a better job defensive-wise the whole game, but especially the second half,” he said. “We gave up second-chance opportunities and allowed Buckingham to get offensive rebounds and second-chance shots on us.”

“He beat us up and down the court,” Mosby said, “and he took shots, he missed, and he had opportunity to get his own rebound and either get a putback or get fouled and go to the free throw line.”

Chambers was 7-for-11 from the foul line and also recorded 11 rebounds, four steals and three assists.

“He’s been working a lot on his three-point shot, and he did a great job draining some threes when we needed it,” Gowin said.

Heslip also added five rebounds, two steals and a block. He joins a group of Knights players including freshman forward Trevor Kelly and sophomore guard Peyton Taylor who have shined in certain games this season.

“We’re just having different guys to step up, and that’s part of the learning process that we’re talking about, so we were pleased with that,” Gowin said. “We had three guys that had 11 rebounds each, and I thought that was a big point.”

In addition to Chambers, sophomore center JaCorey Holman and junior center Brycen Newby each grabbed 11 boards, contributing to Buckingham’s impressive total of 58 for the game. Holman also had six blocks.

“He had all nine in the second half, and so he did a great job picking his game up … and helping us pull away,” Gowin said.

“I was definitely impressed on how he started,” Mosby said. “I’ve been talking to him about not relying on his jump shot on the outside as much as his dribble penetration and getting to the free throw line to open up his game. So, that was definitely an improvement from him.”

Senior center Brandon Leabough was back from an ankle injury for Cumberland, but he was not at full health.

“I think just his presence definitely helped us,” Mosby said, but added that “he still can’t jump and cut and plant like he normally would.”

Gowin said there was a great crowd on hand, as there usually is for big rivalry games like this one and games against nearby Prince Edward County High School.

“It just means a lot to our fanbase and our kids,” he said, “because a lot of parents from Cumberland and Prince Edward and Buckingham all work together in different places, and (there are) a lot of kinfolks in there in all three counties, so it’s kind of something they talk about around the dinner table.”

The Dukes (1-8) are set to return to action Wednesday when they visit Bluestone High School at 7 p.m. Due to inclement weather, their Friday game against visiting Nottoway High School and their Tuesday game at Central Lunenburg High School were postponed.

The Knights (4-5) return to the hardwood Thursday at 7 p.m. at Randolph-Henry High School in a game that was rescheduled from Friday due to inclement weather. Also due to the weather, their Tuesday home game against Prince Edward has been rescheduled for Jan. 23.