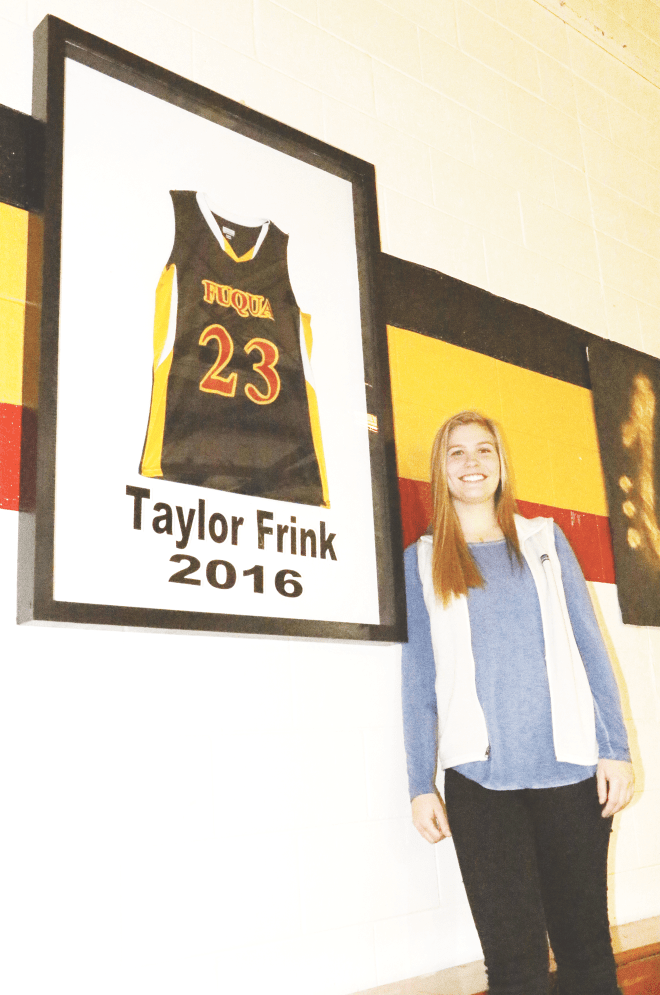 TITUS MOHLER | HERALD Former Fuqua School girls basketball star Taylor Frink stands next to her retired jersey hanging on the wall in Gilmer Gymnasium. It was unveiled during a brief ceremony Friday evening.

Fuqua School’s history, dating back to when it was known as Prince Edward Academy, includes only five basketball players to have their jerseys retired. Recently-graduated Lady Falcon Taylor Frink is the fifth member of that elite group, and she joined it Friday evening during a ceremony that preceded the varsity girls basketball game.

Frink was joined at midcourt by her family and former coaches, the latter of which presented her with a signed basketball commemorating her having reached the 1,000-point milestone during her high school career.

Shortly thereafter, her framed No. 23 jersey was unveiled on the wall above the stands.

“It meant a lot,” Frink said of the ceremony. “Everyone supported me. It was good to be back.”

Frink is attending James Madison University where she is studying health sciences, with the goal of becoming a dentist.

In high school, she played on the Fuqua varsity girls team from 2012-16, becoming only the second female player in school history to reach 1,000 points.

“They pushed me through a lot,” she said.

Bryant said Frink is one of those young people that leaves a lasting impression.

“She’s good and very coachable, so that’s always a plus,” he said.

“She was a coachable player, and she learned from it, and she got to see the results of it,” he said.

Bryant said Frink’s consistency helped her get to 1,000 points.

“And being the high scorer on the team, most of her points came with two or three defenders on her, too, which made it tough,” he added.

Ellington noted she had a knack for getting to the foul line, as well.

She also grabbed 425 steals, 345 rebounds and was an unselfish player, handing out 217 assists.

Frink’s parents were pleased to see her honored Friday.

“She was always just hustling and trying hard, so I think it’s all for her efforts that she’s had out there, so (I’m) super-proud,” said her father, Joe Frink.

The other four individuals to have their jerseys retired include Jeff Henshaw, of Prince Edward Academy, Dane Williams, Andrew Potter and Allison Newman.