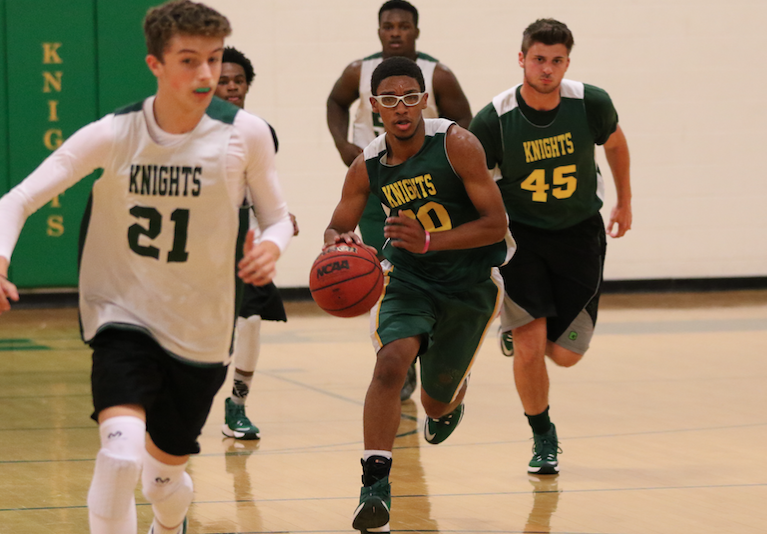 The young Buckingham County High School varsity boys basketball team is off to a 1-5 start this season, but its effort is above reproach and it is showing signs of growth.

The Knights most recent game provided a good glimpse of their strengths and struggles. They hosted Goochland High School on Tuesday evening, falling narrowly, 54-51.

“Our kids fought hard,” Buckingham Head Coach Russ Gowin said. “The last two games against Goochland and Bluestone, we were tied late and just didn’t close the game out.”

The coach added that this struggle happens to young teams like his, which features only one returning player from last season.

Nevertheless, he has liked what he has seen overall.

“I’m just really pleased with the way we’re playing,” he said. “We just have to learn to close games, and that takes experience and takes time, and we’re getting there.”

The Knights got down early against Goochland but fought back. Freshman forward Trevor Kelly hit four 3-pointers in the third quarter to spur the turnaround.

“We went from five or six (points) down to six or seven up,” Gowin said.

Kelly finished the game with 14 points, just one behind the team leader, senior guard Antonio Chambers.

Gowin said Buckingham led by five points late, but the Bulldogs scored the final eight to end the game.

It was a similar story Dec. 9 in a game against host Bluestone High School. The Knights led at halftime and through three quarters, but ended up losing 70-65.

However, they have demonstrated the key ingredients to making those waning moments in games a source of joy rather than disappointment.

“Our kids are staying positive with great attitudes,” Gowin said. “They work hard every day in practice. They do a great job of hustling on the floor and just staying focused in the game. It’s just a gradual building cycle. … We’ve just got to do the little things right, and we’re going to just keep getting better.”

Buckingham’s Dec. 6 game against visiting Central Lunenburg High School showed what the team is capable of as it won 69-59.

“We closed that game,” Gowin said. “That was one of those games that we had that we hit 9-of-10 free throws in the final two minutes to seal the victory.”

Through six games, Gowin has been particularly pleased with the performance of Antonio Chambers.

“He’s averaging about 22 points a game, so he’s done everything we expected out of him,” the coach said.

“He’s done a good job shooting the basketball,” the coach said. “We’re actually trying to get him to shoot the ball more because he’s got a pretty good percentage.”

Junior center Brycen Newby is leading the team in rebounding, averaging 6.8 per game, and sophomore center JaCorey Holman has also been showing promise down low.

The Knights begin play in the Goochland Christmas Tournament on Friday. They play King William High School at 6 p.m., and on Saturday, the Knights face Blessed Sacrament Huguenot Catholic School at 2 p.m.