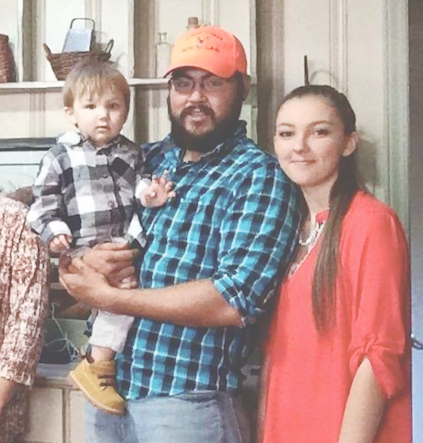 Perry Warner, the father of 24-year-old Jessy Warner, middle, who was seriously injured in a two-vehicle crash in Buckingham in late November, said his son continues to recover from his intense surgeries. Shelly, right, Jessy’s wife, died in the crash. Their 9-month-old son, Timothy, sustained minor injuries. Jessy holds Timothy in this photo.

A 24-year-old Buckingham man seriously injured in a Nov. 27 fatal accident that claimed the life of his 19-year-old wife, Shelly Warner, is out of the hospital and has been moved to a rehabilitation facility in Midlothian.

According to Virginia State Police spokeswoman Corinne Geller, charges are pending against the driver who struck the vehicle in which Jessy Warner, his wife and their 9-month-old son, Timothy, were traveling.

Shelly died at the scene of the crash on Route 15 in Buckingham, less than one mile south of Route 630, in the early-morning collision, according to State Police.

The driver of the Impala, Torrey J. Branch, 22, of Burkeville, was transported to UVa Hospital in Charlottesville for treatment of serious, but non-life threatening injuries.

“He’s getting better, but he’s in tremendous pain because of the nerve, the sciatic nerve, that got damage, got stretched,” said Perry Warner, Jessy’s father.

Jessy is recovering at Sheltering Arms Rehabilitation Center at the St. Francis Medical Center in Midlothian, he said.

“They did quite a bit the first time,” Perry said of the initial surgery, which took several hours.

Nerve damage and arthritis are concerns aired by the surgeons, he said.

“There’s going to be a lot of challenges for him,” Perry said of Jessy. “It could be up to a year before he could totally walk like we are now.”

“Right now, one of the best cures in the world is that little boy being around his daddy,” Perry said of little Timothy. “That’s Jessy’s healing process right there. That and his sister (Kimberly Warner).”