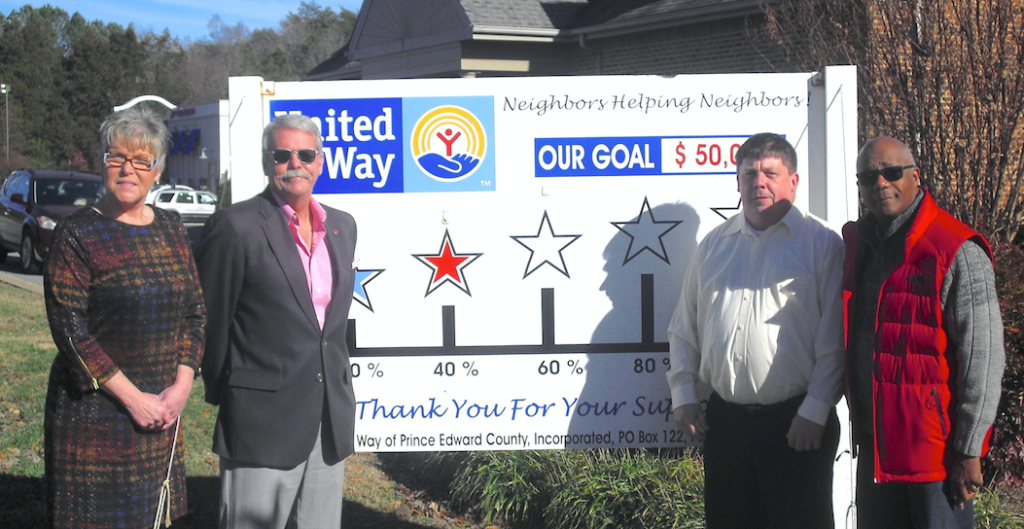 UNITED WAY OF PRINCE EDWARD Pictured celebrating the United Way of Prince Edward County’s recent string of donations, noting them with a 40 percent goal with a star, are, from left, Rhonda Arnold, Rucker Snead, Bruce Davis and Lonnie Calhoun.

“I’m hoping that the end of the calendar year donations will push us over $30,000 by the end of the month,” United Way Board President Rucker Snead said.

The United Way has set the $50,000 goal to distribute the money to its 19-partner organizations that provide services to the community.

“All the money we raise stays local,” Snead said. “So, we will, on Jan. 10 … make our initial disbursement or allocation back to the 19 local partners that we help support financially.”

The United Way makes two allocations each fiscal year, and the first for this year will be at the United Way’s Tuesday, Jan. 10, meeting with its partners hosted by Charleys Waterfront Cafe in downtown Farmville.

When one gives to international and national charities, Snead said, overhead eats up a portion of the donations given, where money donated to the United Way is “spent locally and goes back to local charities.”

After January’s donation presentations, the United Way hopes to raise an additional $20,000.

The group is charting its fundraising accomplishments with stars on its board in front of Citizen’s Bank & Trust Co., located on South Main Street in Farmville.