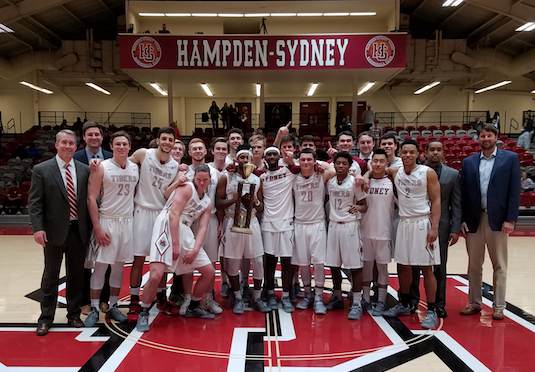 The Hampden-Sydney College basketball team has made December a great month to remember for its fans, giving them a reason for optimism heading towards the back half of the regular season schedule.

After opening December with a 69-53 loss to Guilford College, the Tigers have put together a three-game win streak that has pushed them above .500 for the first time since opening the season with a 70-63 victory over Averett University.

“It definitely feels great,” Hampden-Sydney Head Coach Dee Vick said of being 5-4. “We’re not focused on winning and losing; we’re focused on doing things the right way, and we think that if we do that, that it’ll take care of itself. But it sure is nice to look at the win-loss column and see us back in a positive direction.”

The Tigers defeated William Peace University 86-74 on Dec. 14, avenging a Nov. 22 loss to the Pacers, and then the Tigers’ latest wins came as they swept the Luck Stone Holiday Tournament that they hosted Dec. 19-20. 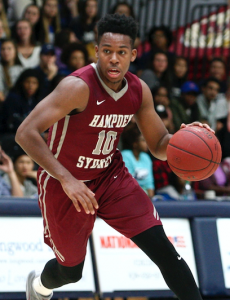 Hampden-Sydney edged Messiah College 75-73 on the first day of the tourney and persevered to top the College of Mount Saint Vincent Dolphins 91-85 in overtime Dec. 20 to win the championship.

“I feel like we’re starting to figure out what we need to do to win games and getting great experience in close games is invaluable,” Vick said. Against the Dolphins, “I was really excited to see us step up to the foul line and make some big free throws and get some key stops down the stretch to secure the win.”

With the score 74-74 going into overtime, the Tigers built an 83-76 advantage with one minute, 17 seconds to play after forcing a couple of turnovers and getting seven points from sophomore point guard Logan Samuels and junior center/forward Guilherme Guimaraes.

In the final minute, Hampden-Sydney went 8-for-8 at the charity stripe to seal the win.

“Our free throw shooting has been a little bit up and down, and we work on it a lot, but the whole key to it is just being confident in those situations, and I felt like we were really confident and the guys stepped up to the line and made the key free throws,” Vick said. “I think we were 11-for-11 in overtime, which was huge. And that’ll bode well for the future, as well.”

The Tigers also have players emerging who are helping make that future look bright, including Samuels, who was named Tournament MVP.

He scored 22 points against the Dolphins, shooting 7-for-10 from the field and going 8-for-9 from the line, adding four assists. He had 22 points, five rebounds and four assists against Messiah and 21 points and five boards against William Peace.

“In my opinion, it’s a miracle that he’s even able to play right now,” Vick said, noting that Samuels has Crohn’s disease, which is a chronic inflammatory bowel disease that affects the lining of the digestive tract. It can be treated, but it cannot be cured, and Samuels has suffered from flare-ups of the condition during his time in college.

“Last year, he had a flare-up,” Vick said. “I think he lost about 50, 55 pounds and had to medically withdraw from school and have a surgery. To see him recover from that and to be as healthy as he is right now is a true blessing.”

The coach said it is amazing to see him on the court and even more incredible is what he has been doing on the hardwood.

“To perform at this high level that he’s performing at right now is really special, and I’m just really happy for him and his family,” Vick said. “He went through a really, really hard time.”

Samuels has been busy acclimating himself to the point guard position.

“He was not a point guard when we recruited him and when we got him here, and he’s had to change and learn a new position, and he’s doing a great job of that so far.”

“He’s a young man on our team from Brazil,” the coach said. “He’s a real student leader on campus. This semester he made a 4.0 (grade point average), as did another player — Nick Chase.”

Guimaraes is a chemistry major and Chase is pre-med.

“They worked hard in the offseason, they’re playing really well, and they give us great toughness,” Vick said. “They’re strong and big, and they’re kind of anchoring our front court right now.”

The coach made a point to highlight all four of Hampden-Sydney’s player that are 6 feet, 8 inches tall or taller, a list which includes Guimaraes, Chase, junior center/forward Josh Katowtiz and junior center Hunter Kuehn.

“They’re all juniors and it’s really a neat story because they’re obviously competition for each other, but they really embrace one another,” Vick said. “They’re best friends. … We have a four-man post player rotation, and they really pull for one another. That’s a hard to thing to find these days in college athletics because most people just view someone as their competition, but these guys know that we need all four of them, and they’re a big part of our style of play. We’re playing through our post this year.”

Sophomore point guard Malik Crute, a mid-year transfer, also drew praise for his exemplary performance in his first game with the Tigers, which came against the Dolphins. He scored 15 points and added four rebounds, four steals and three assists.

Vick described him as a game-changer defensively in that contest.

“I’m pretty sure we wouldn’t have won the game without the contributions he made,” the coach said.

As the season progresses, Vick hopes to see more defensive consistency from his team, and he hopes to lock in who the top eight or nine players will be in the rotation as Hampden-Sydney gets into conference play.

The Tigers (5-4) visit Birmingham-Southern College on Wednesday with tip-off set for 8 p.m.