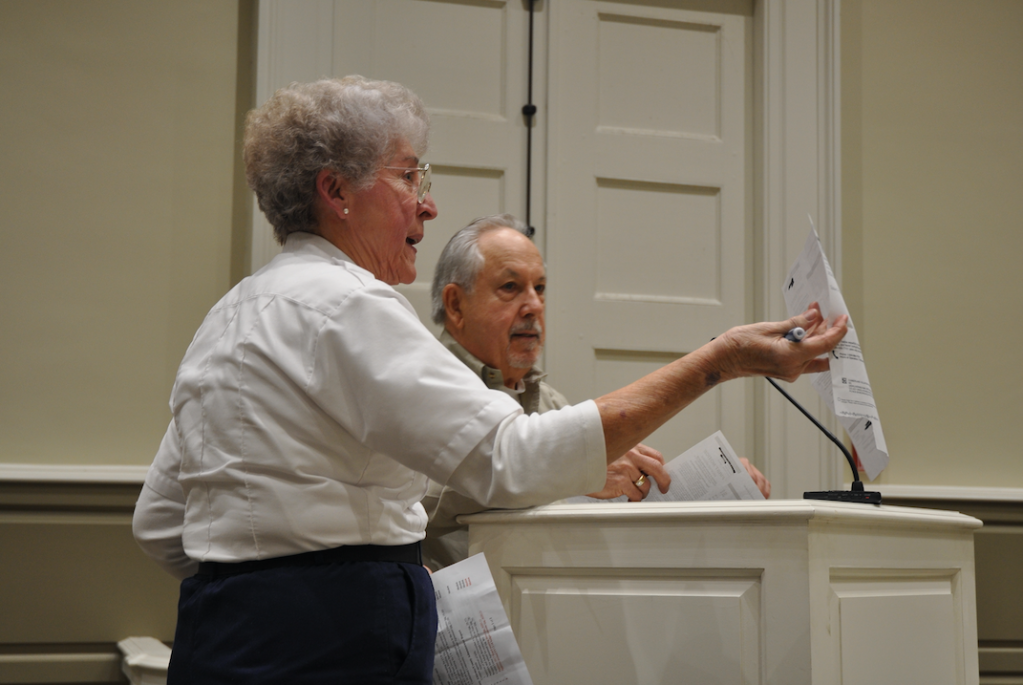 Cartersville squad President Earlene Canaan and Capt. Bernie Becker’s concerns come months after supervisors agreed to pay off the debt owed on the Cumberland Volunteer Rescue Squad’s (CVRS) building in exchange for making the squad a county agency, along with supervisors’ August action to create an emergency services department.

Canaan called the county’s “soft bills” for Cumberland Volunteer Rescue Squad services “threatening;” Becker called them “intimidating.” The Cartersville squad currently doesn’t bill patients for transport or services, while the county now does on behalf of the CVRS.

“I’ve become concerned,” Canaan said, “when I am told that this department was created for one purpose: the ability to tap into grants not available to fire and rescue agencies separately.”

Her concern has grown  with “increasing confusion about the purpose of the two groups, which now represent fire and EMS issues,” she said, referring to the department and the ESC.

Canaan said the county “has not communicated parameters of (the) function of either (the CVRS or Cartersville) group. So we, as an agency, do not know what either of them is really supposed to do … We don’t know how we’re supposed to relate to them.”

She said the “pressure continues on us … to agree to billing,” noting a call Cartersville crews responded to recently that followed a call to the same residence from Cumberland Volunteer Rescue Squad crews. The call from Cumberland’s squad was preceded with a more than $1,200 bill.

Canaan, holding a copy of the elderly couple’s bill in the air, said the type was very small and hard to read.

She said the bill offered no specific information about whether or not insurance had been billed, saying the couple received it roughly one month after transporting the man.

“The bottom line, to me, is that billing companies are concerned about billing and receiving payment. They do not care about the humanity of the people that they are billing, while the humanity of and the human suffering of the people we serve is the very reason we exist. The way it was presented, there are all kind of visual cues in there that are unsettling,” Canaan said of the bill, later adding that a large number of Cartersville volunteers are opposed to billing. “And that kind of occurrence makes us less and less willing to enter into this because the CVRS, that kind of interaction with our citizens is totally unacceptable.”

Cartersville volunteers responded to the second call, which ended up without transporting the female victim.

“My problem with this is that … in this case, a bill like this caused a problem, which is in direct opposition with good patient care. This caused her to go into an anxiety attack,” Becker said of the woman.

Becker called the $1,200 bill “an excessive amount of money … I explained to (the female patient) that she could throw the bill in the trash. This notice doesn’t make any notice to the fact that the bill doesn’t have to be paid. In fact, it looks very threatening. It’s intimidating and doesn’t state the full facts. And it looks like an attempt to get as much money from a patient as possible.”

District Three Supervisor Kevin Ingle said the “soft billing” system means only one bill is sent to the patient. Ingle said he assumed the woman refused transport because of the risk of receiving a second bill.

Ingle said the situation described by Becker and Canaan concerned him “because a lot of people very much take pride in their name and their credit. And, if they feel like something like this is hanging above their head and hurting their credit, they’re going to go ahead and pay it whether they can afford it or not at the rate at which is being charged. Plus, they’ll refuse service…”

District Two Supervisor and Board Chairman Lloyd Banks said he thinks it’s “essential” to bill those who have received squad services. He said he wasn’t for “not sending the bill at all,” while favoring revising the bills “because these services aren’t free.”

District One Supervisor Bill Osl said if the county didn’t bill patients properly, “it’s just going to create all kinds of issues in the community. We don’t want that. You’ve got to do it right.”

County Administrator and Attorney Vivian Seay Giles said county ordinances don’t require revenue recovery for billing, though, she said it allows for it.

“This has got to stop,” Osl said, adding it was wrong if the billing contractor was sending the bills out ahead of sending them to insurance companies.

Ingle said possibly using a “hard billing” method would be “more plain and out on the table.”