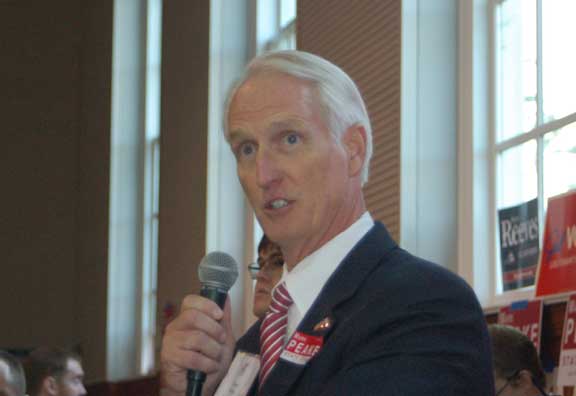 Lynchburg attorney Mark Peake speaks to Republican delegates Saturday afternoon after they nominated him to be their party's candidate for State Senate District Seat 22 by acclimation at Hampden-Syndey College near Farmville. (Photo by Martin L. Cahn)

After a more than a 3 1/2-hour convention, Republicans chose Lynchburg attorney Mark Peake by acclimation to be their candidate for the soon-to-be-vacant State Senate District Seat 22.

On Tuesday, Gov. Terry McAuliffe, a Democrat, issued a writ of election for the soon-to-be vacant 22nd District State Senate seat, which will soon be vacated by Sen. Tom Garrett, a Republican from Buckingham, who was elected to the U.S. House of Representatives on Nov. 8, succeeding retiring U.S. Rep. Robert Hurt.

Rice resident Joe C. Hines has announced his intention to run for the seat as an “independent conservative.”

Hines, who graduated from Fuqua School in Farmville and was raised in Prince Edward County, said that once he gathers enough signatures and officially becomes a candidate he’d send out a formal announcement. Hines is the principal and director of economic development at Timmons Group, a multifaceted engineering firm.

The district includes the counties of Amherst, Appomattox, Buckingham, Cumberland, Fluvanna, Goochland, Prince Edward and Louisa and the city of Lynchburg.