Editor’s note: This is the second in a two-part series examining the feasibility of Farmville’s hosting a minor league baseball team at a downtown baseball stadium planned by Longwood University. What does it take to accommodate a minor league team, and what impact can it have on the host community?

Farmville doesn’t have to look far for examples of small communities that are homes of minor league baseball teams.

In Virginia, the city of Salem has been host to minor league baseball since 1939. There have been affiliates for the Boston Red Sox, Pittsburgh Pirates, San Francisco Giants, San Diego Padres, Texas Rangers, Colorado Rockies and Houston Astros.

Currently playing in Salem are the Fenway Sports Management-owned Salem Red Sox, a Class A Advanced Affiliate of the Boston Red Sox that plays in the Carolina League.

Like rungs of a ladder, there are different levels of the minor leagues that players climb to reach the majors. From lowest to highest, the levels are Rookie, Rookie Advanced, Class A Short Season, Class A, Class A Advanced, Double-A and Triple-A. 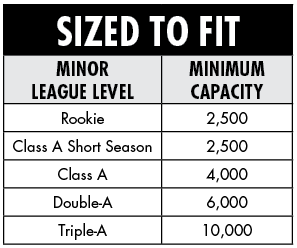 Amid Salem’s long history with baseball, it was faced with the need to build a new stadium following the 1990 season when Major League Baseball released a set of minimum regulations for every minor league ballpark.

As stated in a lengthy article by Clark Ruhland in the spring 2014 edition of “Salem Magazine,” the Salem City Council voted unanimously to build a new 6,500-seat baseball stadium between the Salem Civic Center and Salem Stadium at a cost of $5 million.

It was called the Salem Memorial Baseball Stadium and built to Double-A standards.

Ruhland wrote that many city departments played vital roles in the construction of the new stadium in Salem, including the Street and Building Maintenance, Water, Electric and Engineering departments.

Costs ended up escalating to $12 million, which created some community backlash, but Mayor Jim Taliaferro noted that everyone involved was building a baseball stadium for the first time and did not know it would bring added costs.

Salem Director of Tourism Carey Harveycutter, who served for 40 years as the city’s director of facilities, gave some important insights with Farmville in mind as a town looking to become home to a minor league team.

“We’ve been very fortunate in Salem in that for many, many years, we had one local owner — Kelvin Bowles,” Harveycutter said. “He had the money to back it up, and he bought a franchise that was owned by Larry Schmittou and Conway Twitty and Richard Sterban and that group, and a team that wasn’t winning, that wasn’t drawing huge crowds, and Kelvin took it over locally and kept it, moved it into the new baseball stadium. That’s the key: If you have a good, local owner, that helps you so much. Now, I’m in no way saying that Fenway Sports (Management), the Red Sox owners, are not really good to work with, but a local owner understands the community and is not in it normally to make money. They’re just looking to break even. So, it’s just a different business model.”

Harveycutter spoke to the level of minor league team that might be most appropriate for Farmville.

“Your community is probably sized close to Danville and Bluefield and Pulaski and places like that that are in the Appalachian League,” he said, referring to a league operating at the Rookie Advanced level.

Teams at the Rookie level play during the summer months, limiting potential conflicts with the schedule of Longwood’s baseball team, which would need the stadium from February through the end of May.

“You need to have discussions with people in like the Appalachian League to see what are their expansion plans,” Harveycutter said. “Are they looking to expand the next five years?”

In an interview last week, Appalachian League President Lee Landers did not mention any expansion plans. He said relocation of existing teams in the league is not common, but he added that opportunities for a club coming to Farmville could exist.

“If (the stadium) was built and we would have known about it six weeks ago, I could have guaranteed a club there if everything else met the criteria, not only transportation but going through the relocation applications and all those other things,” he said. “I probably would have had you a club there. Now, to say that would be available three years from now, I think we obviously (need) a crystal ball.”

Revealing some other factors that would need to be taken into account if Farmville were to host a team, Landers highlighted territorial rules through which Major League clubs and their farm teams have the ability to keep new teams out of a defined area.

“The number one thing is we have to make sure that (Farmville’s) in nobody’s territory,” he said.

Lynchburg represents protected territory as it is the home of the Lynchburg Hillcats, a Class A Advanced team in the Carolina League.

“Whatever county they’re in, there has to be a buffer county in between where you project a stadium to go and their protected territory,” Landers said, adding that the buffer county cannot be less than eight miles across.

Appomattox and Charlotte counties converge between Campbell County, which contains Lynchburg, and Prince Edward County to provide the necessary buffer for Farmville to have a team.

“If your county abuts the county that Lynchburg’s in, then that would take special dispensation that’s really tough to go through to get it done,” Landers said.

Among the questions that Landers posed in considering Farmville for a team, he asked, “Could you market it and draw enough people to pay for the bus and the lodging and those types of things?”

Informed of the town’s shopping or catchment area of 100,000-150,000 people, Landers asked, in the case of a long homestand, “Would the traffic (of people) get to the ballpark six nights in a row?”

With a club in the Appalachian League having 34 home games in a season, he emphasized that Farmville would need to ensure it had interest in the area to help sustain a team since tourists could not be counted on to do that throughout a season.

“Is there enough industry around so that you could have a group night at (for example) a textile company?” Landers asked. “If it has enough employees, it’s going to be their night at the ballgame.”

Landers said some leagues and their corresponding teams incur costs related to bats, balls and travel accommodations, while in other leagues, the Major League club accepts these costs and those related to providing umpires.

“Where do you park a thousand cars?” he said. “Parking is always an issue. The (Salem) baseball stadium is on the grounds of the football stadium and the civic center, and in most occasions, there’s no issues with parking. However, when the fair is in town in July, and they’re there for basically 12 days, there are parking issues. We shuttle from the GE plant and areas like that to get the people up, and they complain.”

While there are complications involved, a downtown location can be a key selling point.

“First of all, there’s probably some state money for downtown improvement districts,” Landers said, “but the number one question that I have heard throughout minor league baseball on downtown stadiums is, ‘What took you so long?’, which is kind of a good question to ask, especially towns that have malls and things like that.”

Lodging for the home team is an important consideration and is something that Landers said has been a problem in small communities, though arrangements have been made.

In Bluefield, which hosts the Bluefield Blue Jays in the Appalachian League, the team’s parent organization, the Toronto Blue Jays, pays nearby Bluefield College to house the Rookie-level players in its dorms.

Though there can still be scheduling conflicts with teams and nearby schools, Landers suggested that the presence of two colleges might help make an arrangement easier to come by for Farmville.

The town must also be able to accommodate visiting teams, which means 20 or 30 hotel rooms, most often for three-day stints.

After detailing some of the work involved in making it feasible for a minor league team to come to town, Harveycutter also highlighted the enormous benefits it brings.

“It adds greatly to the quality of life of your community,” he said. “It gives people an opportunity to get out with their friends and neighbors, have an enjoyable night, watch good baseball, but more than that, it’s a social scene. It’s an opportunity for church groups and youth groups and Scout groups and college groups to go out and have a very nice evening. There’s nothing better than sitting at a ballpark, watching baseball, watching the stuff that goes on between innings — which in minor league baseball it’s all about the whole game, not just what’s happening while the ball’s in play — and having a cold beverage and a hot dog.”

Harveycutter noted it gives the community exposure it would not get otherwise.

“You’re in the box scores, you’re talked about in the major league city because they’ll talk about what’s going on down on the farm,” he said. “Salem, this year, had an exceptional year of sending players. We had two players that went from Salem … the first half of the Carolina League, and the end of the year ended up playing in Fenway (Park) for Boston.”

He said the community also gets more exposure in other communities in the media when stories start with the city name.

Justin Pope, chief of staff to Longwood President W. Taylor Reveley IV, said the key point of Longwood’s conceptual master plan is that the future of the school and Farmville is all wrapped together.

“If one thrives, the other will thrive,” he said. “And we very much want Farmville to be a great college town, a great American town, and minor league baseball is a really powerful part of what makes some of our great towns what they are.”