Fore gets his wings back at surprise ceremony 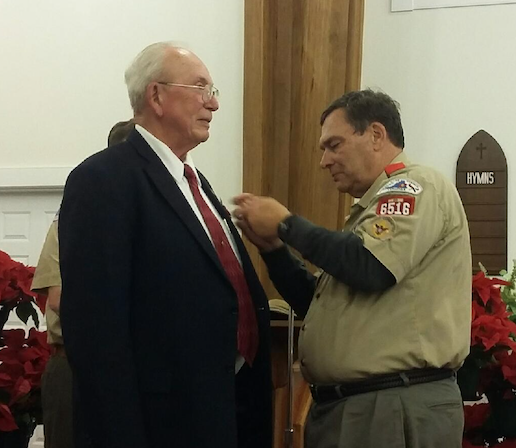 Because of the efforts of a local Boy Scout troop and dedicated friends, a veteran Eagle Scout has his Eagle Scout wings back after the originals burned in a fire nearly 60 years ago.

Ret. Brig. Gen. William G. “Buckie” Fore said he was honored and humbled to be presented with a new Eagle Scout medal on Dec. 12.

“I was absolutely speechless because it didn’t have to happen,” Fore said. “It didn’t mean that much to anyone but me, really.”

He said his original wings were lost in a house fire in 1958.

“We lost everything. We lost it all,” Fore said.

It was items like the medal and family photos that Fore said he has missed the most in the decades following the blaze.

“The big thing is it was an absolute surprise that (this) was going on,” Fore said.

During the ceremony where Fore was presented with his medal, the 78-year-old had no idea he was about to be honored. The medal purchase and presentation was organized through collaboration between his daughter, Rhonda Finch, friend Steve Wall and Boy Scout Troop 6516 of Farmville.

The troop presented the medal to Fore during its December Court of Honor.

Fore attended the ceremony with his wife, Joyce, under the impression he would be watching a Christmas play at the Lutheran Church.

“We got in the church,” he said, “(and) after four or five minutes, I realized there was a lot of scouts there in uniform and a lot of scout leaders, some of which I knew, and I said to my wife, ‘What are we doing here?’”

Fore said his wife told him to just sit tight, so he did, watching as young scouts were presented with various awards and badges. Following the presentation of badges, the Rev. Michael Kendall began speaking, Finch said.

“He started talking and I was sitting there listening and I realized he was talking about me, and then he called me forward and presented the badge to me,” Fore said.

Fore said he was speechless. Even a week later, Fore was still at a loss for words.

He said he was in the Boy Scouts for about five years, until he reached 16 years of age. During that time, he remembers earning 44 merit badges. Even after reaching the rank of Eagle Scout, Fore continued taking tests and earning badges.

“What the merit badge is for, it’s an indication that you are an expert in that field,” he said. “There are a number of tests that you do that range anywhere from speaking in public to fire building, canoeing, camping … any of those things.”

Fore said two of his scoutmasters left a mark on him during his time as a Boy Scout. He said Bob Mayo and Bob Brierly were his mentors as a teenager.

He said after the honor ceremony some troop leaders asked him to come and speak to the boys about his experience 60 years ago with the Boy Scouts and how it has impacted him.

“I will,” Fore said. “I really, really think that being in the scouts helped me with my military career.”