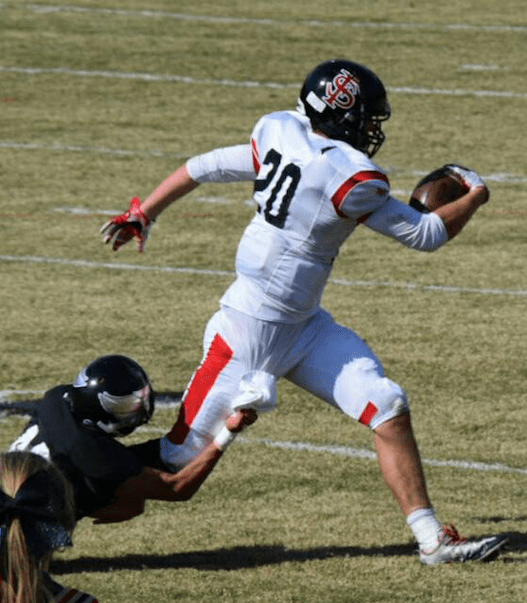 ANGELA STIMPSON Fuqua School senior Ed Newman was named to the VISAA Division III all-state first team as both a tight end and a linebacker.

The Fuqua School varsity football team was recently recognized for its strength during the 2016 season by receiving 11 Virginia Independent Schools Athletic Association (VISAA) Division III all-state selections, with eight of them coming on the first team.

The Falcons’ season ended in the state semifinals with a loss to Roanoke Catholic School, but they went 6-4 this year against a very challenging schedule of mostly teams from larger schools in VISAA Division II, and the Division III coaches made note of that. 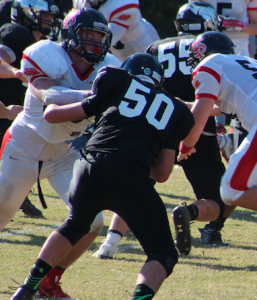 Three of the Falcons’ five players named to the all-state first team appeared on the team twice for excellence at two different positions.

Senior Brad Davis was named to the first team as both an offensive and a defensive lineman.

“Four different coaches were talking, and they said that their kid felt like (Davis) was the best either offensive or defensive lineman they’d faced all year,” Manis said. “Brad did not have the numbers of a Warren (Dabney), but he made an impact and part of that was just pure physical intimidation.”

On defense, Davis compiled 38 solo tackles, 31 assists, one sack and one pass deflection, even without playing in the second half of blowout wins.

Senior Ed Newman made the first team as a linebacker and a tight end.

“He did a little bit of everything, literally everything,” Manis said, adding that Newman played on the defensive line and also spent time at safety and, of course, linebacker. 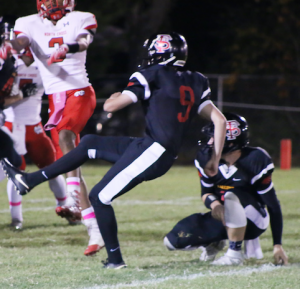 Junior Nick Fariss was recognized on the first team at the kicker and punter positions.

Of VISAA Division II and III, “he’s hands down the best punter and kicker in those two divisions,” Manis said. “Most of his kicks, if we asked to put them in the end zone, most of them went into the end zone.”

Anytime the Falcons got past the opponent’s 35-yard line, Manis said he had confidence Fariss could hit a field goal, adding that he can hit from even further than that.

The coach estimated Fariss had around a 95 percent success rate on extra points.

“He downed multiple punts down inside the 5-yard line whenever we punted in that area,” Manis said, noting that Fariss averaged 35-40 yards a punt.

Dabney made the first team as an offensive lineman.

“That’s probably the place that Warren had most improved this year over last,” Manis said of the speedy junior who he thought should have made the first team as a defensive lineman as well. “Just his pure physical presence and being able to climb to the second level and to the safeties and to corners and linebackers on screens and all, that makes a big difference.”

Manis said Allen’s statistics may not have been as prolific as some of the other signal callers in the division, but he exhibited abilities that set him apart.

“He threw touchdown passes to eight different receivers,” Manis said. “Throughout the year, he had thrown to 10 or 12 different guys.”

Despite missing three games due to injury, Allen passed for 1,048 yards and 16 touchdowns and rushed for 545 yards and nine scores.