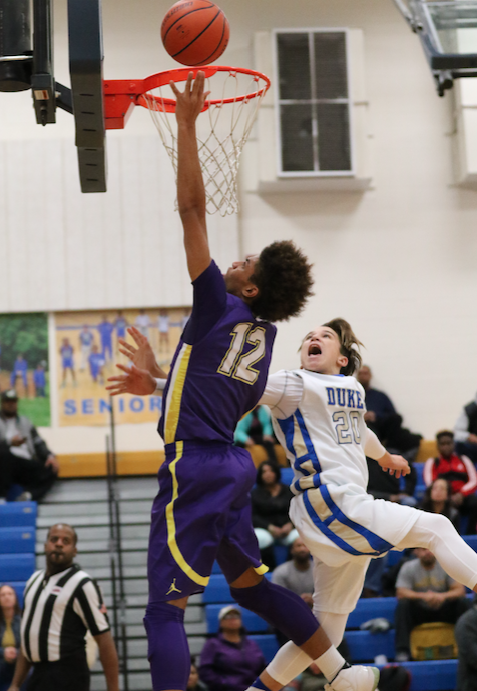 “I feel, tonight, we played more as a team,” Eagles Head Coach James Scott said on Tuesday. “We moved the ball around, we made the extra pass … We played more under control, and were looking to get the ball to the person that was closest to the basket. I feel much better with their effort tonight.”

Against the Dukes, the Eagles jumped out to an 18-4 lead in the first quarter, held a 34-13 advantage at halftime and a 53-20 edge after three quarters.

“He’s been playing (varsity) for four years,” Scott said. “We talked to him about (how) he had to step it up, because he’s the leader, and he’s got to set the tone, so he did tonight, on both ends — defense and offense.”

“He shared the ball, and he really hit the boards tonight,” the coach said.

Despite the loss against Central Virginia Homeschool, Scott saw it present valuable learning opportunities to his players, and it highlighted things that he could emphasize to them.

“We have to continue to play defense,” Scott said. “(Central) moved the ball very well until they got good looks, and that game was really good for us. Of course, I didn’t like the outcome, but it made us mentally tougher, getting back, fighting through screens, boxing out, keep them off the glass. It was a good team.”

Braxton had 16 points in that contest.

After leading against Prince Edward and losing by only eight on Dec. 15, Cumberland struggled in the rematch Tuesday and also lost by 30-plus points Monday against Nottoway High School in the first day of its holiday tourney.

Limiting the Dukes was the absence of senior center/forward and captain Brandon Leabough, who has been out with an ankle injury and won’t be back until next week.

“We got behind early in both games when we didn’t get back on defense to stop transition fast break layups, and we don’t rebound well knowing we don’t have any height,” he said, adding that he plans to continue addressing these issues in practice.