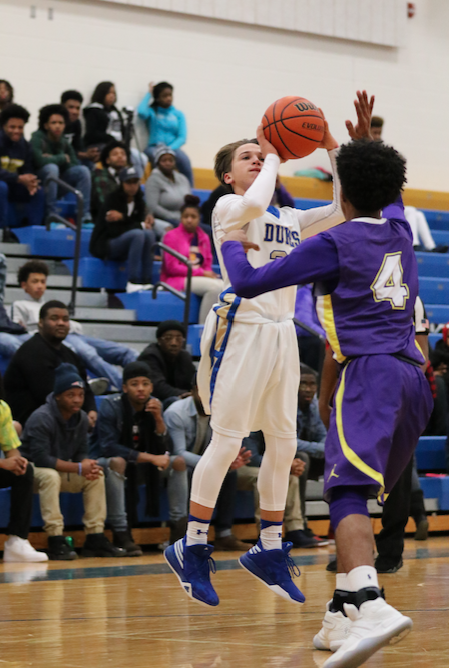 The Cumberland High School varsity boys basketball team has had a difficult start to the 2016-17 season, but the Dukes’ most recent performance has given their coach a glimpse of a brighter future they look to embrace next week in their two-day Christmas tournament.

In their last on-court action, which was on Dec. 15, the Dukes charged ahead late in the first half against visiting Prince Edward County High School but could not carry the momentum into the second half, eventually falling 48-40.

Nevertheless, Cumberland Head Coach Tyrone Mosby said, “I’m definitely impressed on how we played tonight. If we can definitely continue to build off of that defense and offense that we ran tonight, I think we’ll have a better season the second half of the year.”

After trailing early, the Dukes went on a run and took a 26-17 lead late in the second quarter and held a 26-20 lead at halftime. But the Eagles outscored Cumberland 17-2 in the third period.

“Right now, we’re struggling to get a win,” Mosby said, as the Dukes hold a 1-5 overall record, 0-4 in the James River District.

“They’re in our conference, so it was a good win to get that, but at the same time, it’s definitely even better to get some of these district wins (against) some of these (Group 2A) schools that we’re playing,” Mosby said.

What has been hurting the Dukes is a lack of size and a penchant for giving up leads.

“We had a lead in that game also, and we maintained the lead,” Mosby said.

Up-and-comers on the team include sophomore Noah Bland and sophomore Jonathan Weaver, who had a particularly strong showing against Prince Edward.

“He impressed me tonight,” Mosby said on Dec. 15, after Weaver came off the bench and led Cumberland with 11 points.

The Dukes return to the court Dec. 26 when they begin hosting their Christmas tourney. They will face Nottoway High School at 7:30 p.m.