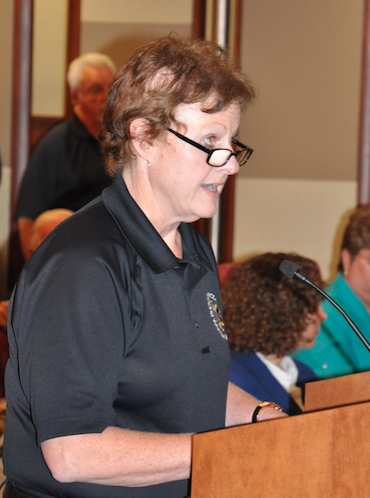 During the board’s November meeting, former BCVRS volunteer Jimmy Strong told supervisors “there is no longer a Buckingham County Volunteer Rescue Squad. The squad is now a paid thing. You don’t have enough volunteer members to man a squad,” Strong said, noting the leadership appointed themselves “on purpose … who wanted (Delta Response Team, or DRT) to come in here. They kicked UVA (Medic-5) out.”

The bids, which were issued at one time, returned in sealed envelopes and opened at one time, came from three providers: Medic-5, DRT, and Emergency Services Solutions Inc. (ESS). DRT was the low bidder.

Sage, along with current chief operating officer and incoming vice president Kerry Flippen and incoming president and current public relations officer Lisa Dunkum, agreed that if the services weren’t bid out, BCVRS would be operating at a deficit.

“We would have been in the hole four months ago,” Flippen said.

As of October, BCVRS had paid UVA over $600,000 for services, according to Sage.

“It added so much when we went up to that second crew,” Sage said, citing she told the officers after the added crew the squad wouldn’t be able to afford it.

“We added, after we accepted their bid, since it was so low, we went back to (DRT) and said … ‘Write us up another figure to give us 24-hour coverage in this county, because we were having problems covering the weekends,’” Sage said.

That’s where the $596,000 DRT contract figure originated — one questioned on Dec. 12 by District Two Supervisor Donnie Bryan when Dunkum addressed the county board of supervisors.

During the meeting, squad leaders made public a July audit, which reviewed and assessed BCVRS’ finances and business practices from fall 2012 to fall 2015, alleging “mismanagement and lack of accountability” with the agency’s finances, citing failures to properly monitor finances, overdrawn bank accounts, a loss of about $400,000, thousands of dollars paid in late fees and penalties, bank accounts in the red, tension among volunteers and a “loss of confidence in the general public.”

In an interview with The Herald, the three agreed that criminal wrongdoing was potentially committed during the recent turbulent financial times at the agency.

At least two employees of DRT sit on the BCVRS board of directors, according to Flippen, who named Justin Sage and Carl Potts as the two.

“It’s always been like that,” Dunkum said of paid crew staff serving on the board.

“We don’t have enough core running (volunteers) to do everything,” Dunkum said. “They’re either a station captain on the board or they’re another position on the board,” noting the small pool to pull from. “You don’t have it … There’s just not enough.”

“We just have to trust it’s not going to be a conflict,” Flippen said.

“We found this. This was left for us,” Sage said of the financial situations revealed in the audits. “We look like the bad guys, but we’re not the bad guys. We’re just doing what we have to do.”

“On the weekends, and then during the week at nighttimes, we’ll also have volunteer crews running because some of the volunteers can’t run on the weekend and so they have chosen to run at night,” he said. “For us to get back to where we would like to be, it’s going to take a while. And, I don’t think you’ll ever see volunteers do it all.”