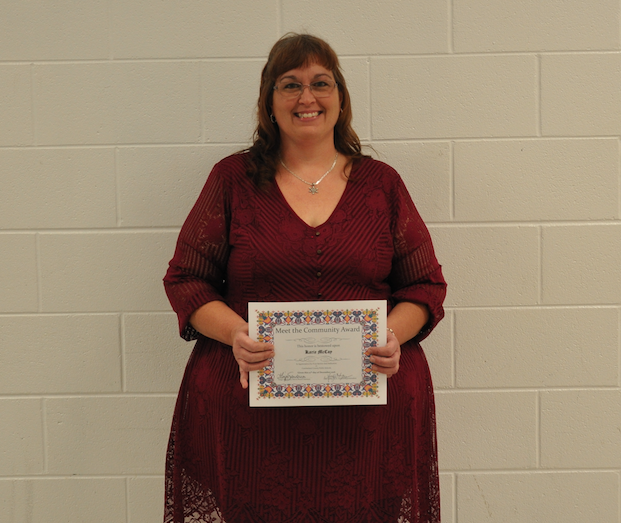 The Cumberland County School Board named Karie McCoy, owner of Karie’s Baked Goods, as its Community Member of the Month during its meeting Monday evening.

Born in Manassas, McCoy grew up in rural Culpeper County. She said that, even when young, she had a love for baking, which was inspired by her dad and her home economics teacher. She was active in 4-H and competed in local fairs in baking, homemaking and poultry. After high school, she majored in office services and business, but minored in home economics. She said she originally planned to work in the secretarial field, but felt God had other plans for her.

After graduating from high school and attending vocational school for three years, she worked in retail for several years. Then she moved on to work in the cafeteria in a school system and in a daycare while her three children were young. McCoy said her most important job has always been her three children: Cody, 20; Aryanna, 12; and Christopher, 8.

During holidays, McCoy said, she would always bake for co-workers, friends and family. They always encouraged her to open her own bakery. Finally, after many years of selling at the farmer’s market, she and her husband of 11 years, Chris McCoy, decided it was time to take a leap of faith.