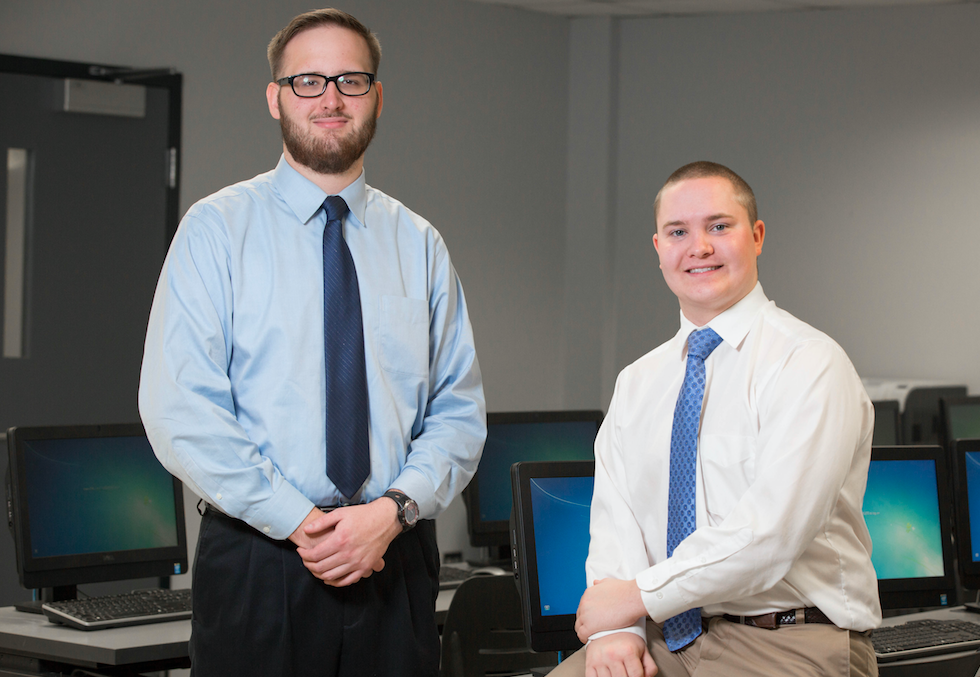 Two Longwood University students who want to serve their country in the critical field of cyber security have attracted the attention and support of the commonwealth of Virginia — to the tune of $20,000 annually for up to two years.

According to a Longwood press release, Tyler Chuba and Michael Moore are among 25 students across Virginia selected for the newly created Virginia Cyber Security Public Service Scholarship. The commonwealth’s return on its investment? Recipients commit to work for a state agency or institution for as many years as they receive the scholarship.

“This scholarship program fits well with our citizen leader model,” said Dr. Darrell Carpenter, director of Longwood’s Center for Cyber Security. “What better way to be a citizen leader than to serve your state? You’ll also be paid well while doing it.”

Chuba, majoring in information systems and cyber security, wants to work for the FBI on cyber-related crimes, or possibly pursue a career in secure web development. Last summer, he completed a cyber security internship for General Dynamics Mission Systems, a Department of Defense contractor, in Oakton. He will continue his internship over winter break.

“Fighting cyber crimes requires constant education, due to an ever-changing technology landscape, but I enjoy the constant learning component of the field. It keeps things less mundane,” said Chuba, who is from Woodbridge. “There’s been a huge increase in cyber warfare between nations, and it is a vital piece of national security.”

Chuba also completed an internship in summer 2015 as a PC technician for government contractor MTEQ at Fort Belvoir. In his role as a Longwood Resident Technology Associate (RTA) in fall 2015, he built a wireless configuration tool for LancerNet, the campus wireless network.

“The configuration tool made setting up wireless security settings for Windows 7 laptops quicker and easier,” said Chuba, also a member of the Cormier Honors College, the Dean’s Student Advisory Board in the College of Business and Economics, professional business fraternity Delta Sigma Pi and SGA.

Moore is also majoring in information systems and cyber security and also is an RTA, technology-savvy students who helps fellow students resolve computer issues. He was planning a career in digital forensics and/or IT, likely with the FBI, CIA or Department of Defense, even before he was chosen for the scholarship.

“This is my way of serving my country. I want to give back to the people of this country one way or another,” said the Richmond native. “Going to college and seeing what this country has to offer has made me an even bigger patriot. I’ve always liked taking things apart, seeing how they work and putting them back together.”

Moore, who liked video games and Legos while growing up, added, “With cyber forensics, you’re taking apart something that someone has tried to destroy and-or hide, bringing it back to life and putting a bad guy behind bars, which is something I am interested in. That’s just the physical aspect; there are other ways that cyber forensics can put bad guys behind bars.”

In addition to his role as an RTA, Moore, treasurer of Theta Chi fraternity, also helps his fraternity brothers with computer problems when they request help.

“I like putting a smile on someone’s face because it makes me feel better knowing I can solve other students’ or brothers’ technical issues, making their lives easier. In general, I like being able to help people. I like the overall service aspect,” he said.

The scholarship, administered by the State Council of Higher Education for Virginia, was initiated by Gov. Terry McAuliffe, who is making cyber security the central theme of his tenure as chair of the National Governors Association. The governor included $500,000 a year in the 2016-18 biennial budget for the scholarships, which are for eligible Virginia students who are studying how to safeguard computer networks, data and electronic resources.

One of the scholarship’s biggest benefits, beyond the financial assistance, is that it will “provide a pathway” to the recent graduate’s first job, he said. “One big stressor for students is getting that first job, many of which require experience, so this will be a relief. This is something that most scholarships don’t do.”