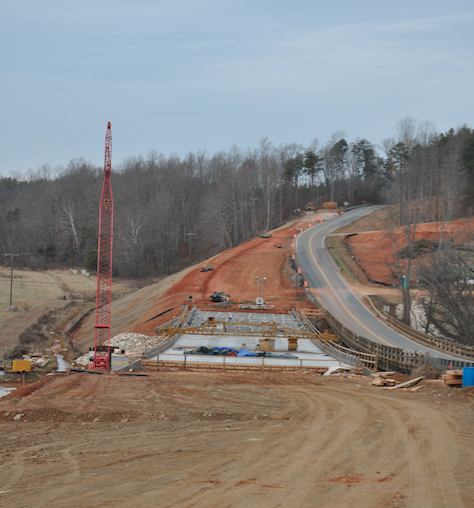 JORDAN MILES | HERALD Construction crews continue to work on the new Slate River Bridge on Route 20 — a project that will enhance the safety of those who cross the bridge, according to the Virginia Department of Transportation.

The $9.8 million bridge replacement project for the portion of Route 20 that crosses the Slate River in Buckingham County is on schedule, making good progress.

The project, along one of Buckingham County’s main thoroughfares, is evident to motorists. Speed reductions are in place in the area of the project. The new bridge structure and lay of the roadway are noticeable as massive amounts of dirt, steel and concrete have arrived.

“The primary purpose of this project is to improve safety and meet current design standards by replacing the bridge and approaches … over (the) Slate River,” Jones said. “This work removes a structurally deficient bridge from the state highway system.” 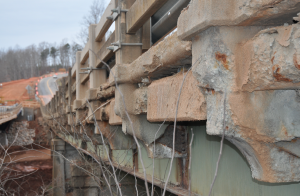 JORDAN MILES | HERALD
The existing bridge, which is narrow, ranks a 47.9 out of 100 on VDOT’s Sufficiency Rating, making it structurally deficient.

Allegheny Construction Co. Inc., of Roanoke, is what VDOT calls the “prime contractor.”

“Everybody else, any other contractors who are on the job, work for them,” Jones said.

Funds used to build the new bridge are coming from federal and state sources, she said.

“Some of it is specialized state and federal money, which means that it’s designated bridge money.”

While the old bridge is about 25 feet wide, the new bridge will be about 47 wide, and will have shoulders. The current bridge has none.

“The shoulders will certainly help,” she said, noting the bridge’s length will be about the same.

“There’s also a horizontal curb that comes into the bridge and, building the new bridge, that is being reconstructed … but that will help as well,” Jones said.

The existing bridge ranks a 47.9 out of 100 on VDOT’s Sufficiency Rating, making it structurally deficient.