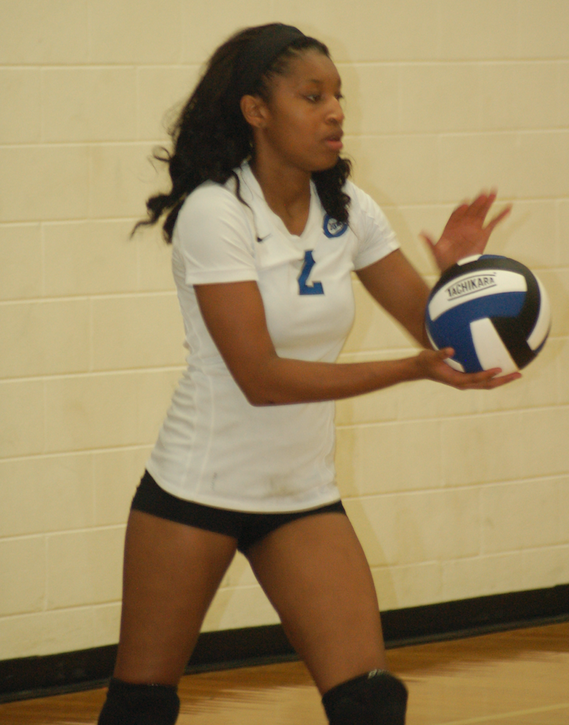 TITUS MOHLER | HERALD Cumberland senior setter/middle hitter Bria Anderson was named to the all-region and all-conference first teams and the all-state second team based on her performance during the 2016 season.

The Cumberland High School varsity girls volleyball team had a strong year, and five different Lady Dukes received awards recognizing their performances, led by senior Bria Anderson, who was named to the All-Region 1A East and All-Conference 42 first teams and the all-state Group 1A second team.

“As a coach, I always have to question if my expectations are too high given the kids that I have in front of me, and this is one of those years that I really kind of pushed them outside of their comfort zone, especially with Kasie and Bria becoming setters, and they’ve always been hitters and passers,” Sutton said. “So, considering the change in formation and the change in the plays we ran, they did really well.”

She added that there was resistance at the beginning of the year, but then everyone fell in line and did what they needed to do.

“I’m very proud of them for what they were able to accomplish,” she said. “You always want to be champion, but at the same time, becoming second after losing quite a few impact seniors last year, they did really well.”

Sutton was not surprised to see Anderson garner accolades from coaches voting for the all-conference, all-region and all-state honors.

“Bria’s a really flashy player,” Sutton said. “You can’t come to a volleyball game and not know who she is when you leave the gym, and that kind of spreads throughout our conference, our region and even the state. She’s a ‘wow’ kind of player, and she definitely did that this entire year again, and she did it last year, as well. She’s made a name for herself. You expect to see her perform well and get big kills, and she did that in every game pretty consistently this year.”

Anderson finished the year with 652 hits, 201 kills and a serve percentage of 94.

She and Fowler were key to the unique setup that Cumberland ran this year.

“Usually you run your setter out of the right position,” Sutton said. “We ran our setters out of the middle and sometimes we switched it to left, so we kind of created our system based on the kids that we had, and it worked well for us. … For the entire group, it was a very non-traditional setup, and they did well with it, and a lot of credit goes to Bria and Kasie for stepping up and learning two totally new rotations.”

Fowler had difficulty at first imagining how it was actually going to work.

“When I first told her at the beginning of the season that I wanted her and Bria to set from the back row, she looked at me like I’d lost my mind,” Sutton said, “which made me then question, ‘Did I lose my mind? Is this really going to be too much on them?’ But after we practiced it a few times, she really started to own it and have fun with it.”

Fowler finished the year with 103 kills, 47 aces and a serve percentage of 90.

Strong footwork and skilled play with her hands made Fowler a particularly important asset to the team.

“She was definitely able to fix passes that weren’t necessarily right to her,” Sutton said. “She definitely worked to get her feet under her and her hands under them and try and get the setup for Bria or for whoever, and I think our hitters definitely showed huge improvement in regards to our kill percentage because of her ability to get there and get them a set.”

Gilbert shined as the Lady Dukes’ libero, and Sutton highlighted her composure in that pressure-packed role.

“I put a lot of expectation on her to basically get every pass, and she does that,” the coach said. “She sacrifices her body a lot, but in doing so, again, she just stays very composed. She knows what her role is on the team, and she kind of keeps other players where they need to be in order for us to be successful and set plays up.”

Sutton noted that defense quite rarely gets recognition, “and she’s one that definitely deserves recognition, because without her, we would have never been able to set Bria up for the season she has had the past two or three years.”

Gilbert finished the year with 371 digs, a 2.59 serve receive average and a serve percentage of 95.

“Being second- and third- or fourth-year volleyball players — so new to the sport, relatively speaking — they just had great showings, especially in the tournament,” Sutton said. “They stepped up, they knew what they wanted to do, and they wanted to be conference champions, and they played like it the entire time.”