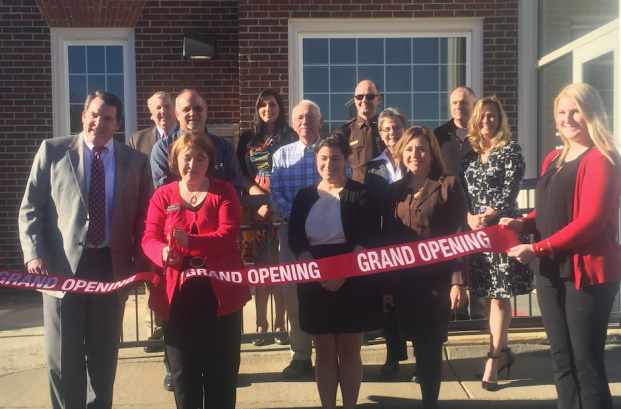 On a bright, sunny, but cool day, the town of Cumberland warmed up to its newest business neighbor, Essex Bank. The bank invited VIPs and customers to the grand opening of its newest branch on Anderson Highway.

The bank’s new home is where BB&T once operated. Cumberland Essex Branch Officer Valerie Nunnelly said it was once home to the Bank of Powhatan.

“Rex found the building,” Nunnelly said, referring to Essex Bank President and CEO Rex Smith, who was on hand for the celebration. “It’s got great bones.”

He became Essex’s president in 2009, after being president of the Bank of Richmond.

Smith said the Cumberland branch is the bank’s 23rd and “fits its footprint” of being in rural city/county communities. Many of its branches are in the general Richmond area, with more in the Washington-Baltimore area of Maryland. There is also a branch in Lynchburg.

“It’s the type of community we like to be in,” Smith said of Cumberland. “We like being in small communities and being involved in them.”

Chip Carter, the bank’s vice president of retail banking, said a lot of Essex’s Powhatan customers are “coming this way.”

“The area seems to be growing,” Carter said.

Including Nunnelly, the Cumberland branch has four employees. The other three employees aren’t merely tellers. They are financial service associates, trained to handle any banking service need a customer might have.

“We put them through ‘boot camp’ so they can provide full service,” Smith said.

“So if a customer needs something, they can come in and get it taken care of right away,” Nunnelly added.

Smith said this kind of training costs more, but he thinks it’s worth it.

Marketing Director Lawrence Wood said Essex Bank is celebrating its 90th anniversary this year. Wood said the Cumberland branch has been completely reimagined from its time under BB&T.

“It was originally set up for a very traditional bank model,” he said.

The community rewarded several law enforcement officers for their service to Longwood University during a ceremony this week. The Longwood... read more