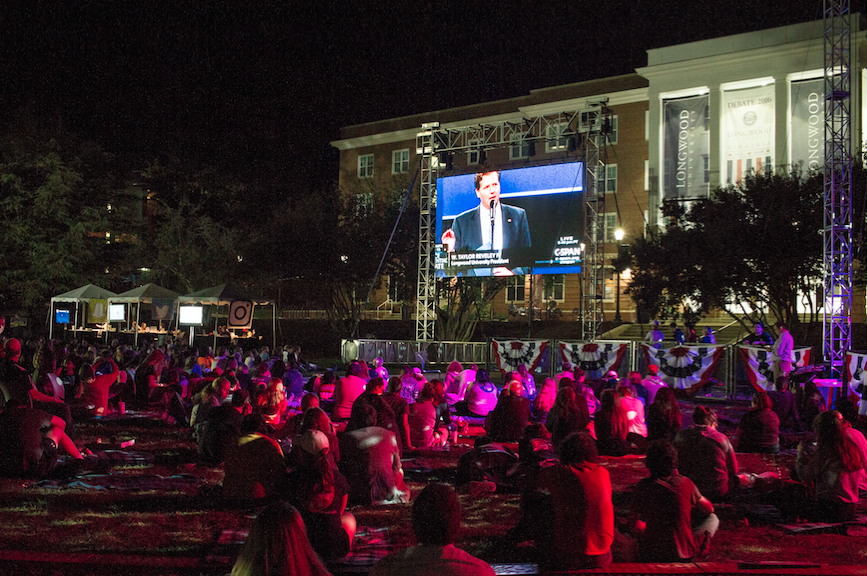 Longwood University hosted more than just a debate. It provided days of opportunities for academic enrichment and fun.

Students, faculty, staff and local residents joined in on the diverse events held across campus and downtown. According to Director of Communications and Media Relations Matt McWilliams, about 2,000-3,000 people were on campus for the debate. Add to that the large media presence — about 2,500 individuals — and somewhere around 5,000 people arrived on campus by Tuesday night.

Perhaps one of the more widely attended events was the Longwood Center for the Visual Art’s (LCVA) “Citizens and Leaders — a Conversation on the Art of Presidential Campaign Photojournalism,” program on Tuesday. Not only did the event draw a large crowd, but chatter could be heard throughout town about the program’s success later that evening.

The event corresponded with LCVA’s recent exhibition, “Citizens & Leaders: A Century of Iconic Presidential Campaign Photography by the Associated Press.”

In a room lined with Associated Press (AP) campaign photography from the past 100 years, including recent Longwood student work, four panelists discussed the art of capturing campaign photographs and how it has continued to change.

“(With campaign photography), you’re trying to make unscripted photos and you’re trying to find moments,” Goldman said during the talk. “Your job is to convey to people who aren’t there what it feels like to be there.”

The panel discussed changes in photography with the addition of digital media and the repercussions of speed on journalistic material. The audience learned what it’s like to be a part of the AP team photographing the debate and how decisions are made throughout the process.

Topics ranged from trustworthiness in the presidency to political children’s books. Professors came from a wide variety of academic backgrounds, including English, communications studies, counselor education, German and others.

The motto for these short, 10-minute lectures was “Docemus Docere,” or “We teach to enlighten.” Longwood encouraged attendees to ask questions following each speaker’s lesson.

These were by no means the only events leading up to the Vice Presidential Debate. There were a wide array of musical performers present on campus, too.

MKTO, a pop duo, played for the students at the school’s VP Jubilee Kickoff on Sunday night, during which 101 students won tickets to the Debate Hall to watch the debate.

The following day, Javier Colon, a winner of NBC’s “The Voice” performed. Students milling around campus could participate in “Minute to Win it” and “Mini Debates” on stage. Later, the Chicago-based comedy troupe Second City-Improv All Stars performed on the Stubbs Mall stage.

On Tuesday, “20 Ride,” a Zac Brown cover band, performed, followed by a jazz combo performance, trivia contest and patriotic music. Student disc jockeys, who called themselves “Jet Lag,” performed both prior to and following the actual debate viewing.

Visitors to Farmville and Longwood were also invited to join in on the newly created Civil Rights Walking Tour, state their mind on First Amendment Field and participate in spirit rallies at various television network stages all day Tuesday.

Following the debate, a late-night breakfast concluded the festivities.

In an email to students Wednesday, President W. Taylor Reveley IV said, “You should be so proud, and I am incredibly proud of all of you.”

He said Longwood’s position as host of the Vice Presidential Debate was not only an important public service, but also “simply a lot of fun.”