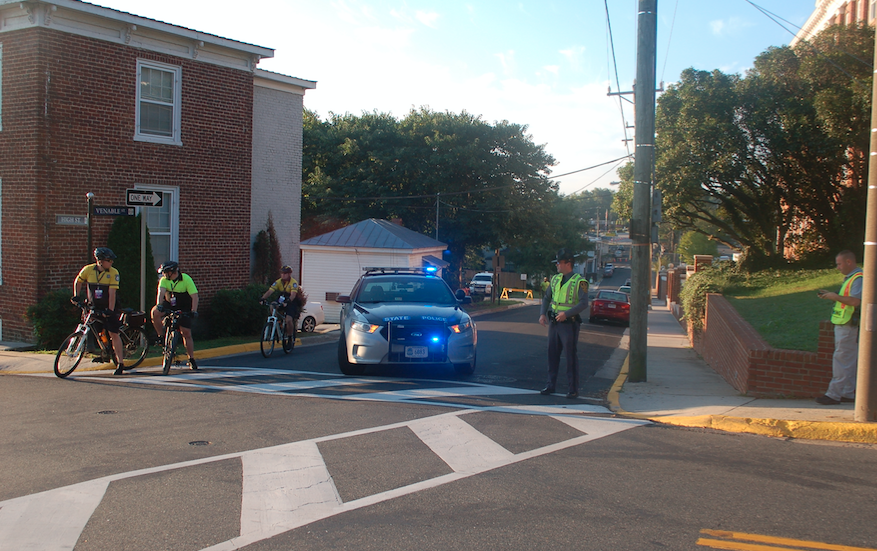 JORDAN MILES | HERALD Virginia State Police troopers, along with other law enforcement officers, stand guard at Venable Street on Tuesday, ensuring no vehicles travel down it.

No arrests or serious incidents occurred during activities associated with the sole U.S. Vice Presidential Debate at Longwood University in Farmville.

With helicopters circling overhead, blue lights flashing around the perimeter of campus, thousands of feet of tall security fencing and more than 550 public safety personnel — including Secret Service agents — Farmville police said the event, which drew the eyes of the nation to the community, “was the event we all hoped it would be.” 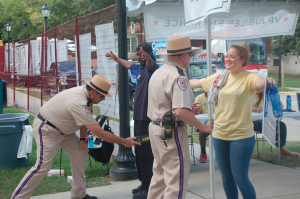 JORDAN MILES | HERALD
Officers with a contracted security firm use metal detectors, checking members of the public for weapons and other objects at the entrance to Stubbs Mall.

Late last week, tall metal fencing was erected along parts of the campus and inside the main campus’ borders. Soon after, notably Saturday, contracted security guards were stationed at specific entrances and exits as Farmville and Longwood police officers, along with troopers with Virginia State Police, patrolled campus.

Eventually, law enforcement from across the state — from officers who patrol state parks to a bicycle unit from Virginia Commonwealth University — would descend on Longwood’s campus in anticipation of Tuesday’s debate between Democratic vice presidential hopeful and U.S. Sen. Tim Kaine and Republican Illinois Gov. Mike Pence.

The total number of agencies involved with the debate, including fire, EMS, sheriffs’ offices and state agencies, was 66, according to town police. 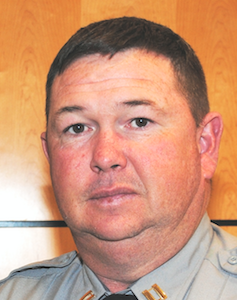 “Roughly a third of those were law enforcement. A wide variety of other agencies leant their support, ranging from a Civil Support Team from the National Guard; the National Weather Service; Virginia Department of Transportation; regional fire departments; and officers from as far away as the Pennington Gap Police Department,” Farmville Police Department officials said in a press release. “At the same time, our local volunteer fire departments and EMS went above and beyond, providing extensive personnel and equipment resources.”

“This historic event definitely would not have been the success it was without the cooperation and dedication of officers, deputies, fire, EMS, town public works employees and other agencies,” said Farmville Acting Chief of Police A.Q. “Andy” Ellington in the department’s release. 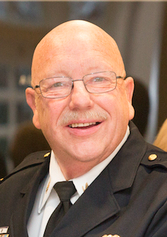 “There were no arrests or charges placed in connection with the event,” police said in the release. “Law enforcement officers responded to no more than a dozen questions and concerns raised by residents from Sunday to Tuesday evening. Nothing of significance was reported.”

There were a minimal number of protesters present on and around the Longwood University campus and in downtown Farmville, police said.

“It’ll be interesting to see the critique of the community,” Beach said. “Not to say that there weren’t any incidents. We had suspicious packages, we had suspicious people that we had to address and talk to and find out about. We had one glitch in one of the earlier motorcades where there was just some conflict on which lane of traffic they were going to use.”

One of the first goals when planning the security surrounding the debate was the impact on the community, Beach said, noting that emergency services and their response to area residents weren’t affected.

“Realizing what we said about, first, the community can receive no harm, the community was still getting all of the same services from the town of Farmville and the EMS and the university,” Beach said.

Police had “all the resources we needed,” Beach said.

According to police, at the height of the debate, more than 550 public safety personnel were actively involved with the operation.

“We would like to thank area residents and merchants for their patience and for being forthcoming with concerns and issues that developed leading up to the debate,” Ellington said.

From about 7 p.m.-midnight Tuesday, South Main Street from Putney Street to Griffin Boulevard was closed to traffic. Through trucks were not permitted at all Tuesday through the section of roadway.

“We were very pleased with the minimal impact on town traffic,” police said in the release.

About an hour and a half following the debate, crews began removing security fencing while major media outlets began dismantling their stand-up broadcast locations Wednesday morning.

“To be involved in a historic event of such a large scope and of national significance was amazing,” Ellington said. “What an opportunity to see the resources we had at our fingertips, from all across the state, working together as one to manage something of this magnitude in our small town of Farmville. We spent months preparing for the worst, and hoping for the best. And that’s exactly what we got. It feels good to know our planning and law enforcement presence was part of what made this event such a success.”