Longwood students get golden tickets: Raffle gives Lancers a front row to history at their school 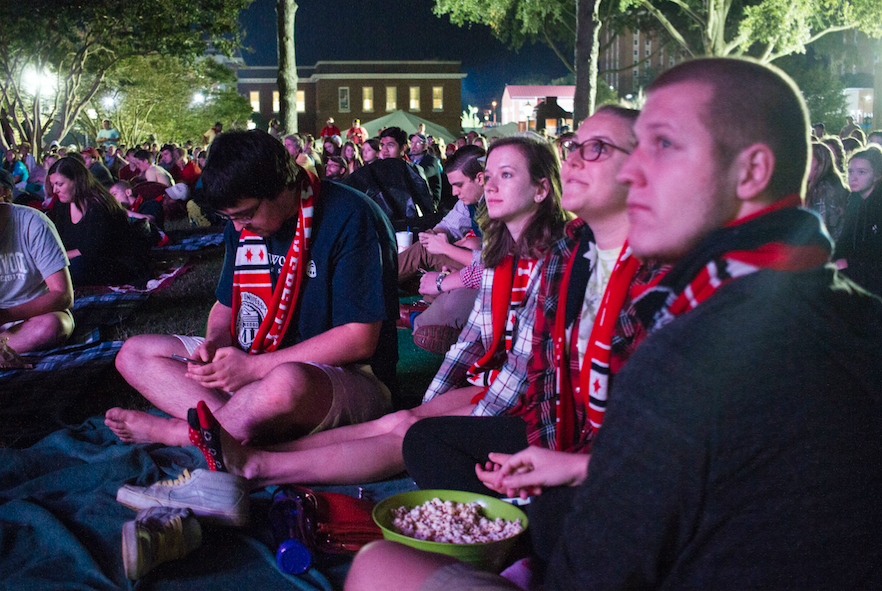 There’s no debate — Longwood University students had a terrific experience becoming part of history this week.

Among the nearly 5,100 students who attend the college, 700 volunteered to assist with the  Vice Presidential Debate. One hundred and one lucky students won tickets to watch the debate from inside Willett Hall, the official debate venue. In addition, about 2,000-3,000 students returned to campus to watch the debate in various ways and participate in the festivities, according to Director of Communications and Media Relations Matt McWilliams.

One of those students was senior Mary Callender.

“Honestly the entire time I was sitting in the debate hall I was kind of in disbelief,” Callender said. 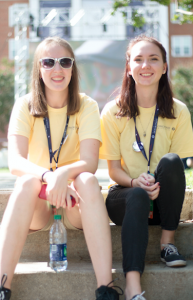 CARSON REEHER | HERALD
From left, Ann Polek and Taylor O’Berry take a break while volunteering with Jubilee festivities. Polek was one of 101 students to watch the debate from inside the Debate Hall.

She said she heard people around her addressing each other as “senator” or “congressman” and that’s when it hit her just how big a deal this event was for the town.

“It was a once in a lifetime opportunity that I’m so beyond grateful for,” Callender said.

Being in the debate hall was a surreal experience for Nicole Riddick.

“There’s so much more than what is seen on TV,” Riddick said.

She said she now knows much more about how the broadcasters operate at big events like  debates.

“It was great witnessing history, but it was a little difficult to watch at times,” she said.

Riddick said she’s used to watching debates in bed and interacting with people around her, as well as communicating her own reactions via social media.

“I wasn’t really allowed to react in the debate hall, which presented itself as a challenge at times,” Riddick said.

Overall, though, she said witnessing all the festivities was an amazing experience.

“I could have never imagined this happening at our small school in the heart of Virginia,” Riddick said.

“I never thought I would have the chance to experience (the debate) like I did,” Massie said.

She remembered being at Sunday night’s VP Jubilee Kickoff on Stubbs Mall talking to a friend about wanting to win. A little while later, those on stage called her name — she received a ticket for inside Willett Hall.

Though it was an amazing experience, in regards to the actual debate, Massie said she wasn’t a fan of the slander and interruptions by the two candidates.

“I felt there were times where it was really strong and the candidates were getting their views across, but then there were times I felt that they were evading questions and weren’t really trying to give their best answers,” Massie said.

Overall, though, she said she believed it went well and shed light on important issues.

At first, Callender wasn’t a fan of the debate, but after seeing how it transformed the campus and brought added energy to Farmville residents, she changed her mind.

“It was amazing seeing Farmville, Virginia, on every national TV station,” she said. “It was worth every bit of the little inconveniences and construction, and I’m so proud to be a Lancer.”

Riddick said she was interviewed about six times by blogging students, local news stations and even NBC. She also managed to be seen live on MSNBC.

“I’d never really paid much attention to MSNBC until today, though, and I really enjoyed their live broadcast,” Riddick said.

She said the anchor was very interactive with students on air and had so much personality to share.

“I will remember this day for a very long time and will share the wonderful experience with anyone that will listen,” Massie said.

Riddick did point to a social media trend following the debate: #Norwood. In light of Republican candidate Indiana Gov. Mike Pence thanking “Norwood University” rather than Longwood University, large amounts of current and former students have poked fun at the mistake by creating Facebook pages, Twitter feeds and other web pages for “Norwood University.” Other people caught on and begun “hashtagging” (using # before certain words or phrases) the fictional school, even creating humorous photoshopped images of Longwood signs and diplomas with “Norwood” typed over “Longwood.”

In one tweet on the recently created “Norwood University” Twitter feed, someone wrote, “I wouldn’t exploit a simple mistake. #Norwood you.”