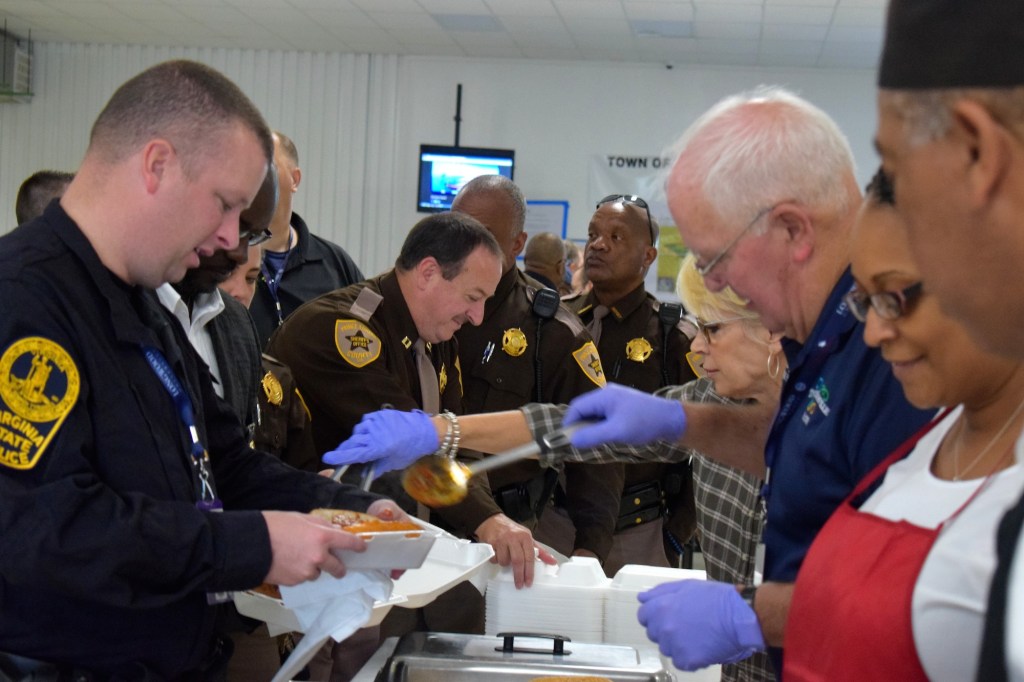 While all eyes were focused on the vice presidential debate stage at Longwood University, a small army of public safety and law enforcement personnel were at work behind the scenes and throughout the community.

K.C. Sehlhorst, with the Central Virginia All Hazards Incident Management Team (CVAHIMT), was in charge of logistics on Debate Day — Oct. 4.

“This event is monumental,” he said.

It’s lunchtime, and the Firemen’s Sports Arena is a busy place. This is the food command center where meals are served to those who serve to keep the town safe. 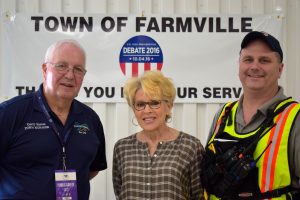 On debate day, Farmville Town Manager Gerald Spates and his wife Linda were at the Fireman’s Sports Arena to assist K. C. Sehlhorst, right, with the Central Virginia All Hazards Incident Management Team. Sehlhorst was in charge of logistics for the debate team of law enforcement and public safety personnel.

“We have a presence here for the debate from state police, FBI, Secret Service and town and county law enforcement,” Sehlhorst said. “The town has been fantastic in making everything work.”

Putting on a pair of food service gloves, Spates and his wife, Linda, joined the serving line to dole out a lunch of Philly cheesesteak and meatball subs provided by the town of Farmville.

“These guys have been great to work with,” Spates said of the CVAHIMT Team. He also credited Farmville police for making his job easier.

“Farmville Police Chief Andy Ellington helped with everything from finding a key to a building to helping us feed thousands of people,” Sehlhorst added.

“It’s really been a team effort,” said Ellington, who was appointed last week as permanent chief of the Farmville Police Department. “It would not have happened without a town manager like Gerry Spates and a mayor like David Whitus supporting us.”

The biggest challenge, according to CVAHIMT planning captain Kevin Pannell, is logistics.

Longwood University, the town, hotels and Fort Pickett provided housing for those on debate duty.

“Longwood University and the town of Farmville have done a fantastic job,” Sehlhorst said. “I give kudos to Longwood, too.”

“Farmville has been a gracious host,” Pannell adds. “We’re all off our diets — the food here is delicious.”