B-day with a side of debate 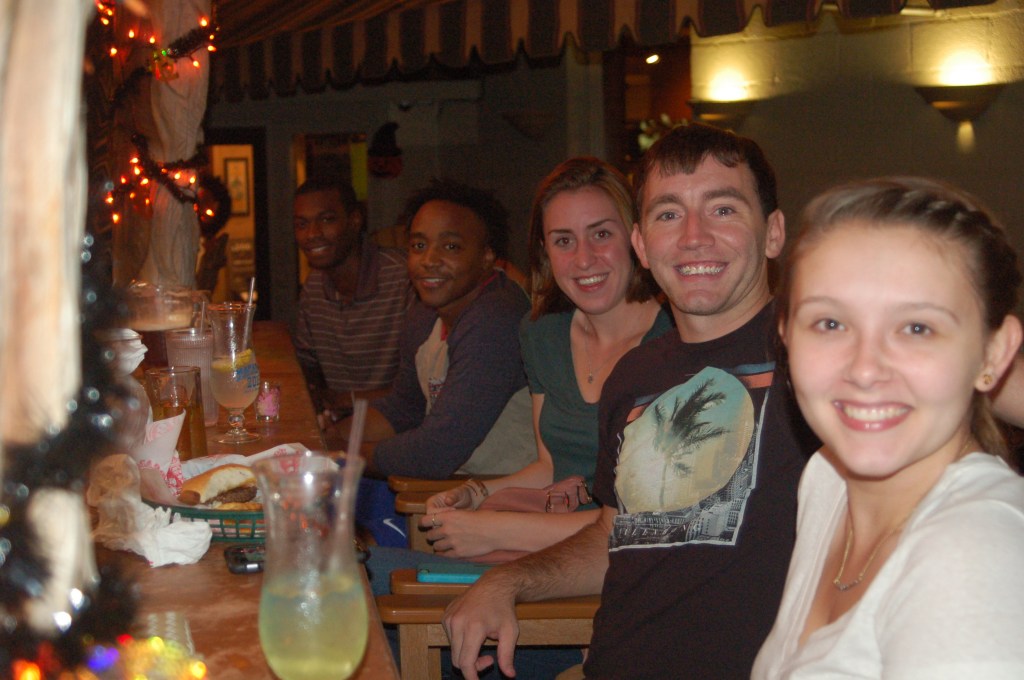 TITUS MOHLER | HERALD A group of friends from high school gathered together at Macado’s on Tuesday evening, selectively viewing the debate on a nearby television while celebrating the birthday of both Rachel Thomson, center, and Jacob Jamerson, second from right. Pictured, from left, are Asim Brooks, Darius Ford, Thomson, Jamerson and Kristin Aitken.

For so many in Farmville, Tuesday was defined by the lone U.S. Vice Presidential Debate of 2016 taking place in town, but for a group of five former Prince Edward County High School students enjoying an evening at Macado’s, the debate was just a small part of the day. They had gotten together primarily to celebrate the birthday of two people in their group — Rachel Thomson and Jacob Jamerson.

Jamerson, who lives in Farmville, said he and Thomson like to think everybody came to town Tuesday to recognize their birthday.

As the group sat at a bar in the outdoor portion of Macado’s, the debate played without sound on a television in front of them. But closed captioning allowed them to follow along if they want, which they did selectively.

“I just started reading like a minute ago,” said Kristin Aitken.

Including Asim Brooks and Darius Ford, everyone in the group has a history in the community and expressed a positive opinion of how the town and Longwood University arranged for and orchestrated Tuesday’s debate.

The improvements made to the downtown area in anticipation of the event were especially striking for Thomson, who now lives in Fort Worth, Texas, and had not visited Farmville since Christmas 2015.

“The town looks great,” she said.

Aitken is a second-year master’s student at Longwood and has not found the changes in school schedule and complications of hosting such a high-profile event to be a problem.

“I’ve gotten a longer fall break, so it’s been stress-free,” she said. “Everything’s been going smoothly. We’re all excited.”