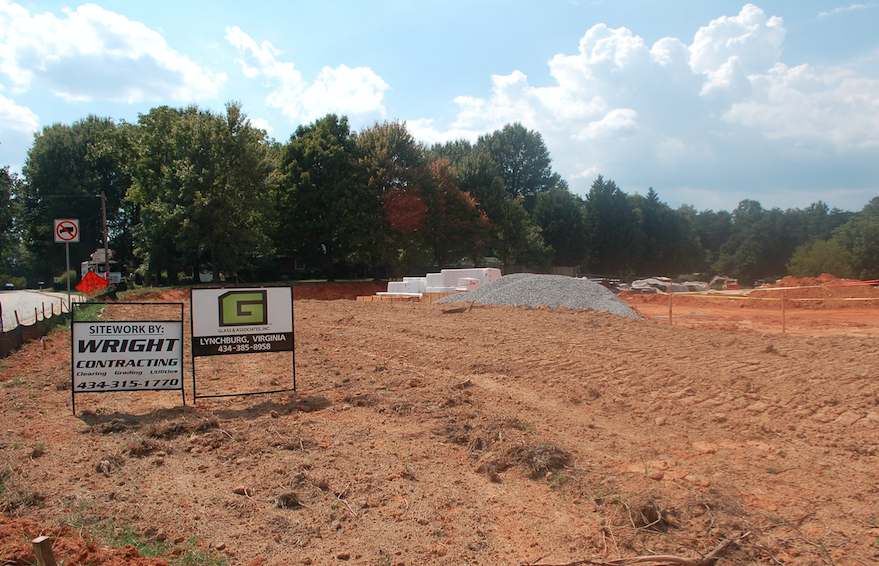 JORDAN MILES | HERALD Construction is progressing for a freestanding Schewels Furniture Co. building at the intersection of Peery Drive and Merriwood Farm Road.

Q: What is being built behind the Dollar Tree off Peery Drive? It doesn’t seem to have a big footprint. There are no signs saying what’s coming.

Crews have broken ground and started construction of a freestanding Schewels Furniture Co. building at Peery Drive and Merriwood Farm Road in Farmville.

footers have been poured and the structure could start going up this week.

“I haven’t gotten a date from them yet,” he said, of when the new store might open.

Once located downtown, the furniture company is now at 1507 S. Main St.

In a previous interview, co-owner Marc Schewel said the company purchased the new property which will include the standard size for a typical Schewels retail location, including a 22,000-square-foot showroom and 8,000 feet of storage space.

“We just felt like this was a good time to relocate,” said Schewel. “The Farmville community has been a great market for Schewels,” he added.

Schewel said he appreciated the support in Farmville of the company over the years.

According to its website, “Schewels was incorporated in 1917. Schewels operated out of a single location for over 30 years, opening its second store in 1930 in Harrisonburg … Growth was conservative for the next 75 years, with 12 stores comprising the chain in 1972. Beginning about that time and continuing into the present, growth became more aggressive, with almost three dozen new locations opening from 1990 until 2001.”

As for what could fill the soon-to-be vacant space Schewels currently shares with Tractor Supply Co. on South Main, Spates said nothing is sure yet.

“I’ve talked to the owners of the property. Of course, they’re talking to several people and businesses. And Tractor Supply actually leases half of that building and only is using about a third of it … They’ll get somebody in there. They’re working with a few different people right now, (but) there’s nothing concrete.”