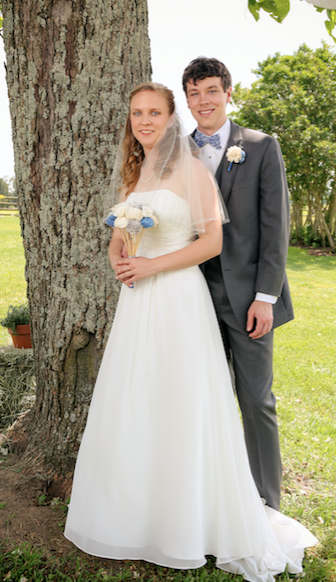 High school sweethearts Sarah Robinson and Travis Downes were married on Saturday, May 28, at Spring Hill Farm in Cumberland, the Robinson family farm.

The groom, the son of Bill and Ginger Downes, of Farmville, graduated from Prince Edward County High School.

The bride was attended by Lindsey Gore, who served as maid of honor; Jennifer Goble; Jessica Bound; and her sisters, Allie Gibson and Jeanne Robinson.

The groom was attended by Bill Downes, who served as best man; Garret Casale; Aileen Giordano; and brothers-in-law Curtis Gibson and Ryan Shipley.

The groom’s sister, Katie Shipley, served as mistress of ceremonies.

Sarah went to Catawba College for her undergraduate studies and received a Masters degree from Virginia Tech in 2015. Travis went to the University of Virginia and completed his Doctor of Medicine degree at UVA Medical School in 2016.

After a honeymoon in Yellowstone National Park, the couple returned to their home in Charlottesville, where Sarah is an environmental analyst for Eastern Research Group and Travis is a resident at UVA Medical Center.

Miss Rebecca Lynn Duker and Mr. Andrew Hardy Reames were united in marriage on Saturday, June 25, 2016, at one... read more