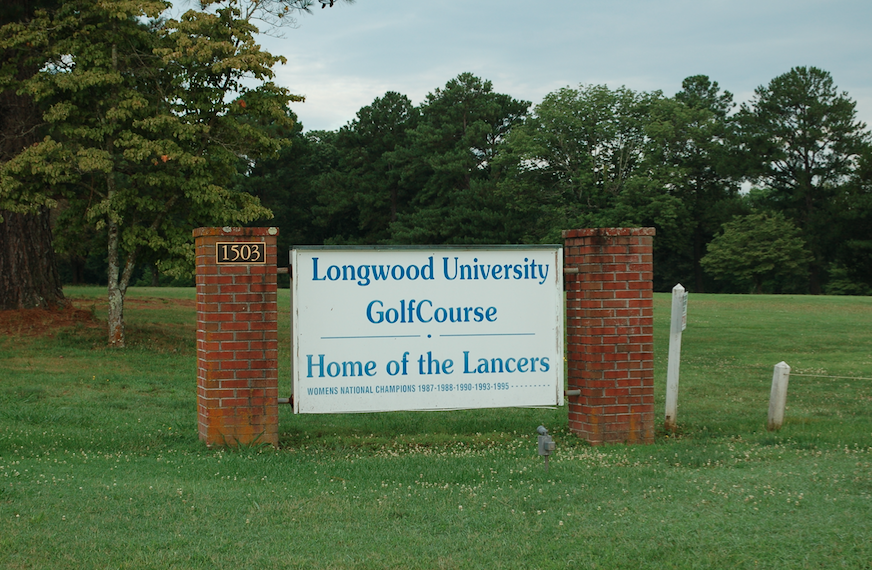 This photo was taken after the Longwood University Golf Course was officially closed as of July 1, and before they had a chance to take the sign down.

Fourth in a series

By Dr. Ray A. Gaskins

It is obvious that the Farmville Golf Club’s makeshift 6-hole golf course on Rice Road in 1928 led directly to the driving range at Longwood Estate. The golf course was so close to Longwood, the young ladies couldn’t help but notice it was attracting gobs of young men everyday. They surmised that if Longwood had a driving range, it would attract some of those young men. President and Mrs. Jarman, who championed the whole notion of purchasing Longwood Estate as a recreation center for the students, also championed the idea of a driving range to encourage more young ladies to take advantage of the recreational opportunities at Longwood. 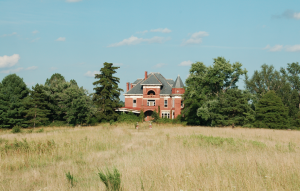 Even in its present closed state, The Manor house adds a touch of class to the golf club. Part of the house dates from 1840.

Helping the young ladies get that golf driving range was one of the last things Mrs. Helen Wiley Jarman (1871-1929) ever did. She died suddenly of a heart attack on Jan. 27, 1929. Her husband, Dr. Joseph L. Jarman (1867-1947), was president of the State Teachers College (STC) for a record 44 years. He guided it through Prohibition, Woman’s Suffrage, WWI, the Ruffner Hall fire of 1923, the purchase of Longwood Estate in 1928, the Depression and WWII. He also guided it through two name changes — the State Normal School for Women (1914) and the STC (1924) — but he just missed seeing its name changed to Longwood College in 1949.

In 1939, the STC hired Mr. Carroll Brown, golf pro from Roanoke, to give golf lessons to students and faculty. In the fall, he had 45 students and was so successful, he was kept on until the outbreak of World War II. He organized both Winter and Spring Golf Associations. Lessons were on the Longwood Golf Course in the spring and in the STC gym in the winter. Transportation was furnished every hour during the week to and from the golf course.

Ironically, the opening of the 9-hole course at Longwood in 1938 led directly to the demise of the Farmville Lake course in 1940. Now things have come full circle. The Manor Golf Club, where on some of the greens you can still make out the remnants of the old Farmville Lake greens, has contributed to the closure of the Longwood Golf Course as of July 1.

The first attempt to build The Manor by the Community Development Authority in 1999 failed due to the recession. A subsequent attempt, by the Poplar Hill Community Development Authority, was successful and construction of the 18-hole championship course began in Oct. 2004, although the official groundbreaking did not occur until Thursday, Nov. 11.

According to golf course architect Rick Robbins, who has designed courses all over the world, Poplar Hill was a dream site. “Very, very seldom do I go to a thousand-acre plus parcel of ground and have not a single major utility line easement. Usually we have big towers coming across it and high line wires, gas easements and things like that or you have to travel ten miles by dirt road to get there.”

The Manor Golf Club finally had its grand opening on Wednesday, June 14, 2006. It was worth the wait because it was chosen as one of the “Best New Golf Courses of 2007” by Golf Digest Magazine. After a rough start, the financial support of both Hampden-Sydney College and Longwood University now guarantee its success. It may even be expanded to 27 holes sometime in the future.

Even less has been written about an older home at Poplar Hill, one that, had they known about it, the Virginia WPA would have been happy to inventory. The Woodson home was built shortly after Richard Woodson (1705-1774) was awarded his 1743 land grant. It was a four-room house he and his wife, Ann Madelin Michaux Woodson (1710-1796), lived in. It was older than the town of Farmville (1798), or H-SC (1776), or even Prince Edward County (1754), but it was in the way, so Walter Dunnington had it moved back, over the hill, and used it to house farm hands. After surviving for more than 200 years, it was bulldozed during construction of the golf course.

In 1932, Hampden-Sydney College hired Prof. Francis Ghigo (1908-1983), a 1929 graduate of Davidson College, to run the Spanish Department. But he was also interested in golf, so he organized a golf team in 1934. H-SC did not have its own golf course, so Coach Ghigo made arrangements to use the 9-hole course at Farmville Lake for training and the Boonesboro course near Lynchburg as their home course. That first season, the H-SC golf team played intercollegiate matches against the University of Richmond, Davidson, N.C. State, Wake Forest, W&L and VPI. They won only one of those matches but it was a significant one — VPI.

When the Farmville Lake course closed in 1940, H-SC used the Longwood Golf Course for practice and stuck with Boonesboro as its home course. While at H-SC, Prof. Ghigo completed his MS and Ph.D. at UNC. In 1959, after 27 years at H-SC, Dr. Ghigo resigned and returned to Davidson, where he taught for another 15 years, retiring in 1974.

The golf program languished even before Coach Ghigo left, mostly because travel was curtailed during WWII, but it was subsequently taken over in 1960 and revitalized by Coach Bob Thalman, who was also the football coach. When Briery Country Club opened in Keysville in 1959, H-SC began using it as their home course.

H-SC has never had a golf course, but it did have a golf driving range beginning in the 1980s. The range was dedicated Oct. 6, 1990, in honor of Lt. Col. Gustav H. Franke (1916-2002), math professor and golf coach at the college from 1964 to 1981. One of the professors who lived across the road from the driving range complained to Weenie Miller, the Athletic Director at that time, that he was finding golf balls on his lawn and was afraid of being hit in the head. Wennie’s immediate reply was, “Jack Nicholas couldn’t do it!” Quick as a wink, the professor replied, “You’re right, because Jack Nicholas knows what he’s doing.” A new lacrosse/soccer practice field eventually replaced the Gus Franke driving range.

NB: To say the least, the Dunningtons of Poplar Hill were friends of H-SC. J.W. Dunnington and his two brothers, Walter G. Dunnington Jr., and John H. Dunnington, all entered H-SC as freshmen in 1908. Moreover, his grandfather, Capt. John H. Knight, and his uncle, Gen. John T. Knight (1861-1930; H-SC 1880), were also H-SC men. In addition both he and his father, Walter G. Dunnington Sr., served on the board of trustees of H-SC. This no doubt made it easier for Coach Ghigo to negotiate favorable treatment for the H-SC Tigers Golf Team at the Farmville Lake course.